I've heard from quite a few people that quilts have been mailed; if you haven't had a chance to mail yours off yet, please can you try to do so by Saturday, which is the end of February. Thanks to those of you who have let me know quilts have been mailed/received. I really appreciate this as it saves me having to chase people up later.  Also, I can keep track of mailing dates, so I know whether someone should start worrying if their quilt hasn't arrived...

I have both mailed my own quilt off (though it was going outside the UK, so hasn't been received yet that I know of) and received my new little one - it's all so exciting!
Posted by Kate North at 23:20 1 comment:

OK, I have now emailed everyone (well, except myself) to say where you should send your quilts - please try to get them in the mail by the end of February if possible. I know at least one person is away, but that's ok, she let me know (and anyway, it happens to be my quilt, so I can wait a while if need be).  If you are going to be away and can't get your quilt in the mail before you go, please let me know.

If you didn't get an email (or two separate ones, for those who made two pieces) please contact me right away and I'll try again.

A couple of fun things you might like to note - when I was pairing up quilts to owners, I do it totally without names attached, just numbers, so I don't always see patterns until later, so I didn't notice until sending out emails that there's one instance where someone is sending her quilt to the same person she's receiving one from (technically, two people in that situation!). And, although in this instance, she didn't actually get the quilt in question, I did find it funny that Julie put her sister's quilt (sight unseen) at the top of her prefence list [don't worry, I'm not ruining it - she didn't realise at the time, but she has since learned it and knows that her sister is sending to someone else - I can't say what quilt she's getting for fear of ruining her surprise, but it's still very high on her list, so I'm sure she'll be fine with it!].  Her sister (Andrea) also had Julie's quilt high on her list, even without seeing it first.  Guess they have more in common that just genes!

Can I please remind everyone to let me know either by email or by posting here when you mail your quilt off and when you receive one. And please do contact the maker of your quilt to let her know it arrived and to say thank you!
Posted by Kate North at 23:15 4 comments:

I have now received all the preferences lists from the swappers, and have spent a not-too-taxing couple of hours sorting out the swap this evening (probably). Some of the issues have been checked  - not assigning the same quilt to two people, not assigning two quilts to one person, not giving anyone their own quilt (unless they specifically asked for it - in this swap, a handful of people said they'd be happy to have their own piece back, but no one listed it absolutely first, so it's most likely that no one will get their own back - but I'm not saying for sure, as that would spoil the surprise!).  It's looking good, but there is still one check to make, and it's one I won't do until tomorrow, when I'm sure I'm a little less tired:  double checking quilt numbers against people's original emails (just in case I enterred their preferences wrong in my master spread sheet). And then I'll start sending out mailing info, assuming everything is ok.

Several people have expressed interest in how I swap out - I won't go into huge detail, but here's the essence of it...

I start with a spreadsheet of quilt numbers. When A Quilter sends me her preference list, I enter the data in my spreadsheet, using the extremely sophisticated method of  putting a "1" in her first choice column, "2" in the second choice column, and so on. For those who send me tiered lists, all 1st tier choices get a 1, second tiers get a 2 and so on.  For those who say "quilt no 50 is my favourite but I'm happy with any of them", column 50 gets a "1" and the rest get asterisks.  For those who just say "I like these 10 in no specific order" their choices all get asterisks (or sometimes, all "1's" - it depends).

Once I have all the data, I look at it totally as data - I don't even leave the names on when I'm working on it (and I usually do it on paper as it's easier to see all of it at once that way). I start with those quilts which were on the fewest lists (I use a tally at the bottom so I know how many lists each quilt is on); they get assigned first. As I assign a quilt to a new owner, I shade the other choices of that owner, and periodically re-total, either visually or actually by adding up to keep an eye on which quilts need to be assigned next.

At some point, I also start looking at which quilts were the most popular - the makers of these quilts usually get a quilt fairly high up on their preference list if at all possible - but I try to be very flexible and make it so that the greatest number of players get a quilt which is near the top of their list.  So for instance, if I have a situation where player 1 would get her 2nd choice quilt and player 2 her 10th choice quilt, but by swapping those two around, both players 1 and 2 would get their 3rd choice quilts, I'd take the latter situation.

Amazingly, because we are all individuals and all have different taste in quilts, this is usually not that hard to do (last round was pretty tricky, I think because it was too big - with 50 quilts in the swap, I really needed to have preference lists of 15 to 20 from most players, but only got 10-12).  In this swap, I actually barely ever hit a stumbling block and had to regroup, even with the few players who sent me very short preference lists.  Which is nice for me.

Assuming that I haven't made any fundamental errors in inputting the preferences originally, I think everyone should be pretty happy with this swap - everyone should get a quilt on their list and I don't think anyone will receive one below about 7th or 8th choice (and in many cases, you sent 12 or 15 choices!).

I don't think it's particularly useful (or kind) to provide a public ranking of the quilts in order of popularity, so I'm not going to do it (and I'm not just saying that because my own pieces never make it to the top!), but I will say that there were 5 quilts which appeared on at least 20 lists (out of 35). These were no 4 (untitled, bright and modern),  no 9 (untitled, long piece with flowers), no 10 (Tree Bones), no 21 (Cherry Chirps - the most popular, on 30 lists!) and no 31 (Mason's Whirl).

I'll post again when I've sent mailing info out - I should have it done by the end of the weekend.
Posted by Kate North at 00:35 5 comments:

That's all the quilts for this round of the swap.  Here's what you do next:

Have a look at the quilts.  Decide which ones you like best. Send me a list of at least 10, please - more is ok. You can either order the list in strict order 1 to 10 (or whatever) or just say "these are all the ones I like" or say "I like these best and this group second best". Whatever works for you. I hope that everyone finds a number of things that they like.  And if you really like your own quilt more than most of the others, that's ok,too - just put your own number at the top of the list, or whatever.

Please try to get me your list in the next week or so; after that, I'll begin the task of allocating the quilts to their new owners.  When you send me your preferences, please also make sure that you send your postal address. If you have played in a recent round of the swap and haven't moved, I probably have your address.

And thanks to everyone for playing!
Posted by Kate North at 22:53 No comments: 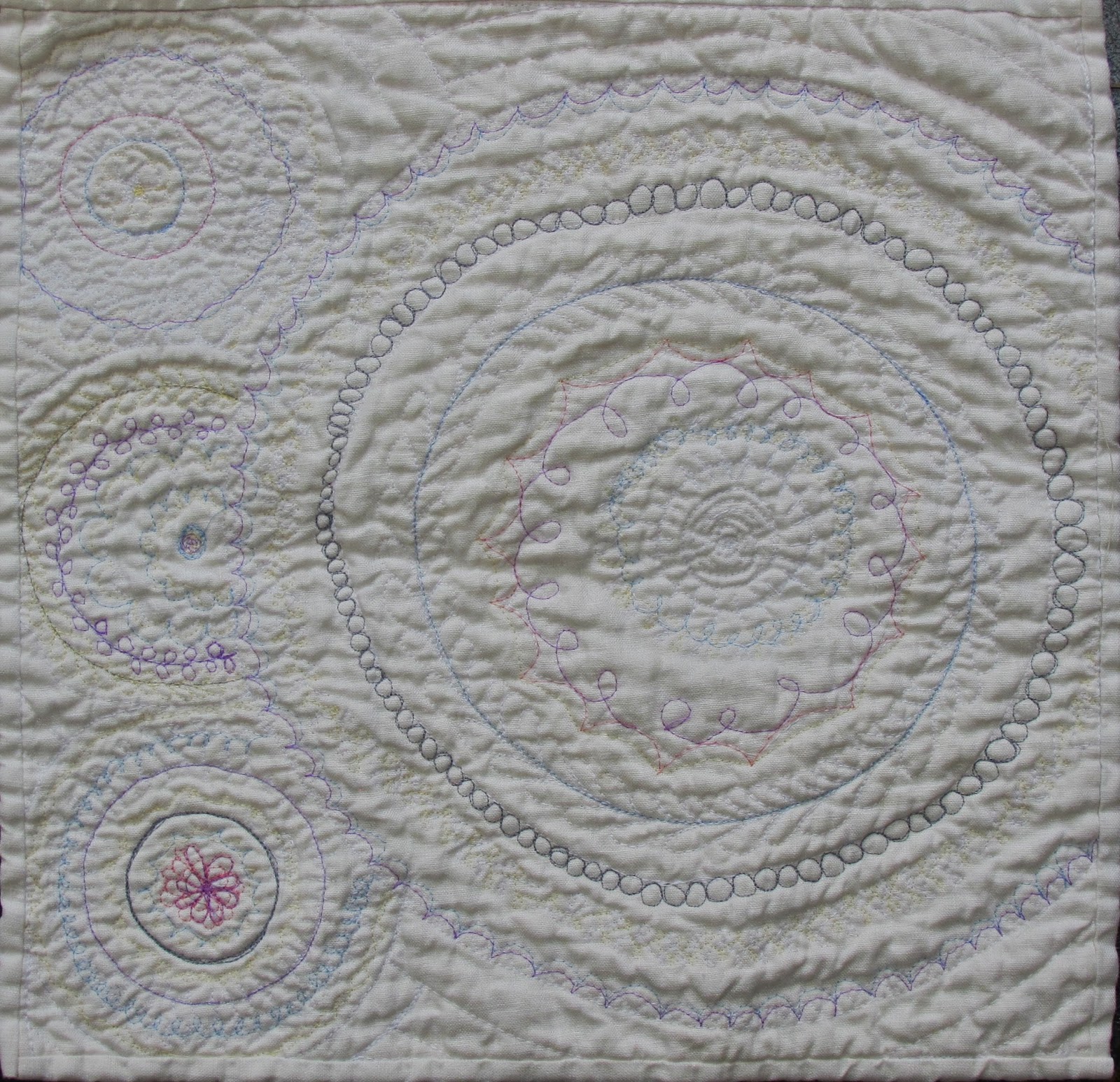 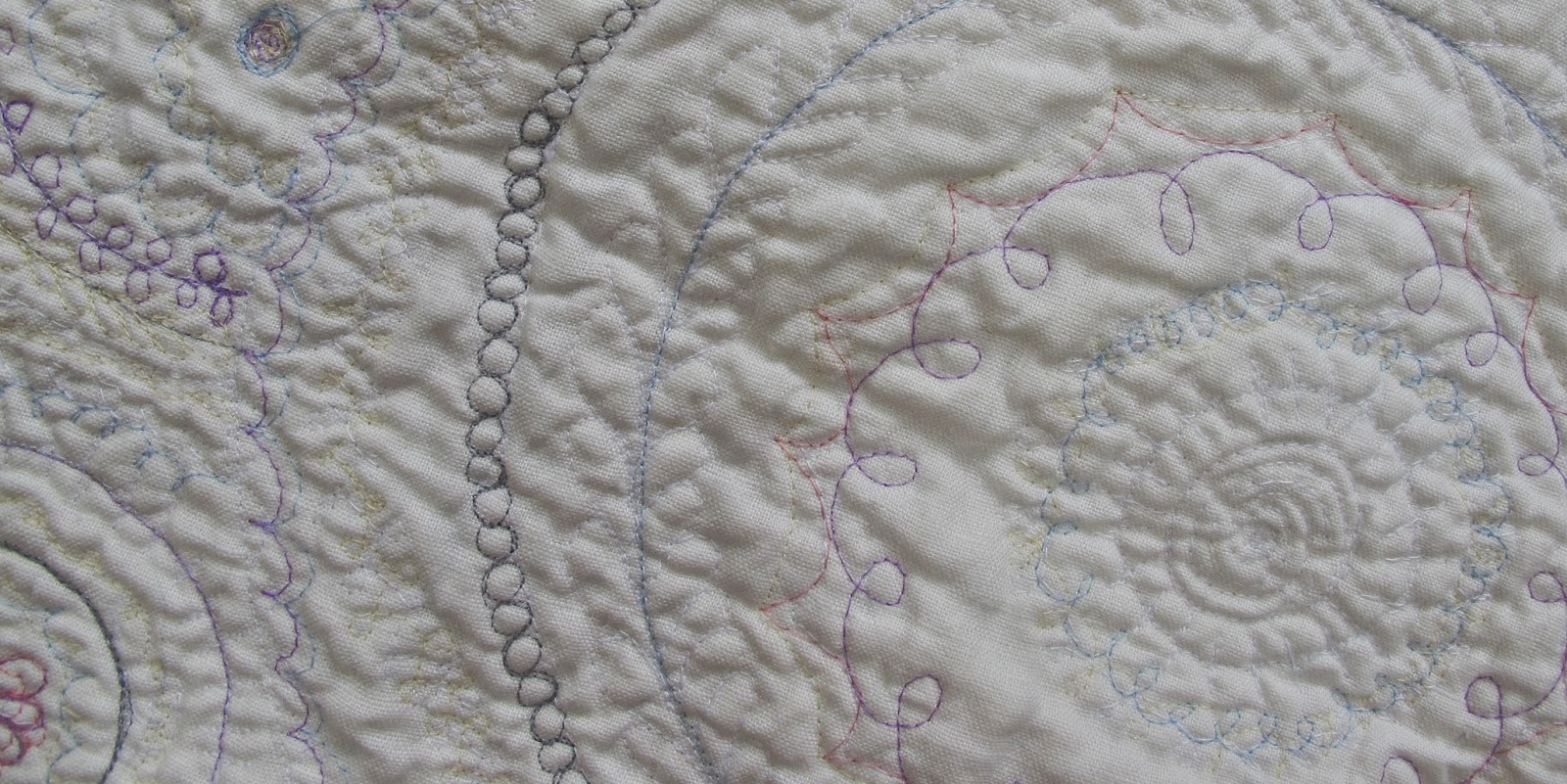 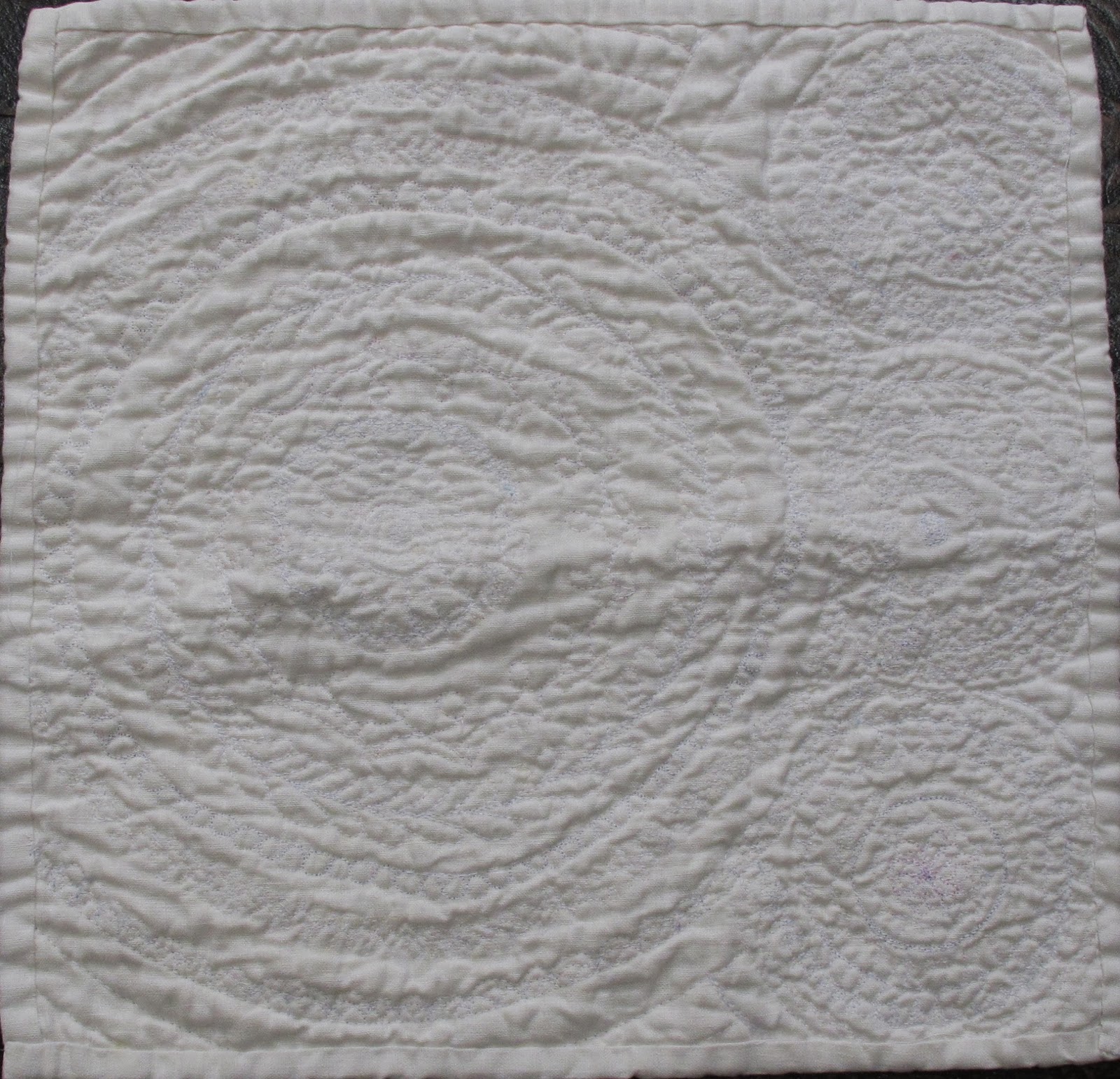 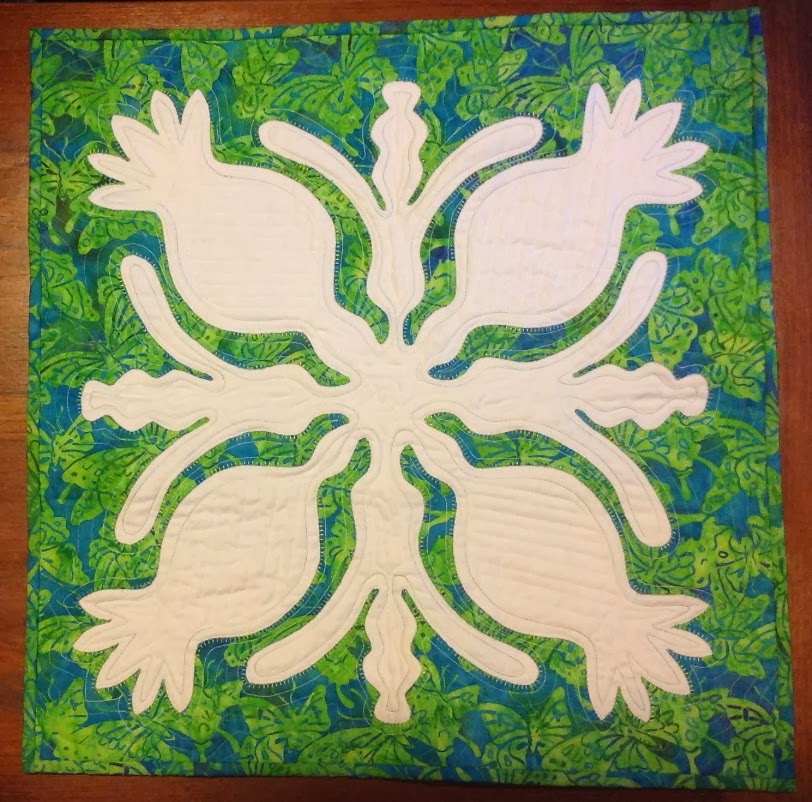 Aloha Friend
approx 19x19.5"
This is an original design by the maker (woo-hoo!), machine appliqued and quilted. 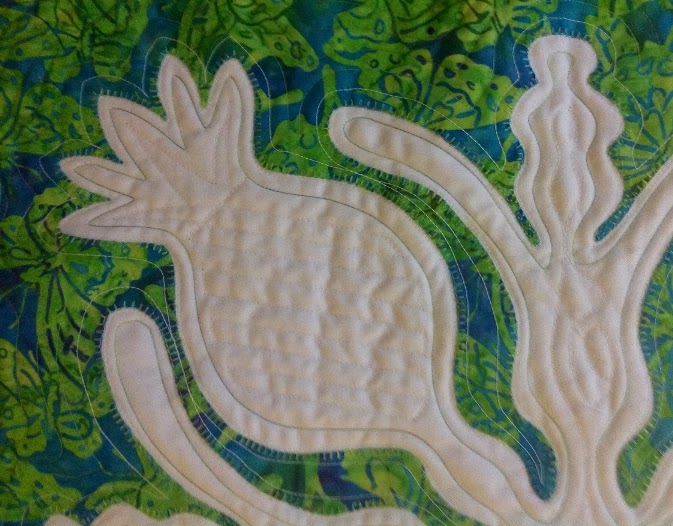 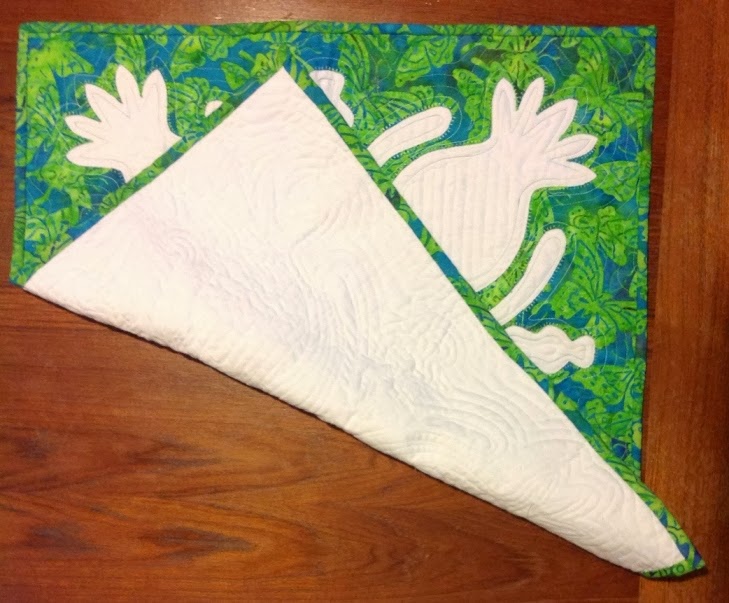 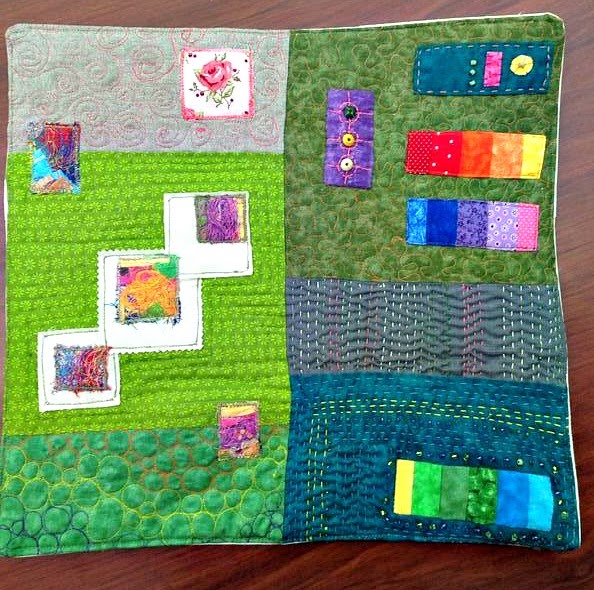 untitled
approx 41x43cm
This work in free format is done with cotton fabrics and is machine quilting and hand embroidery, plus uses small ornaments and fabric applications. 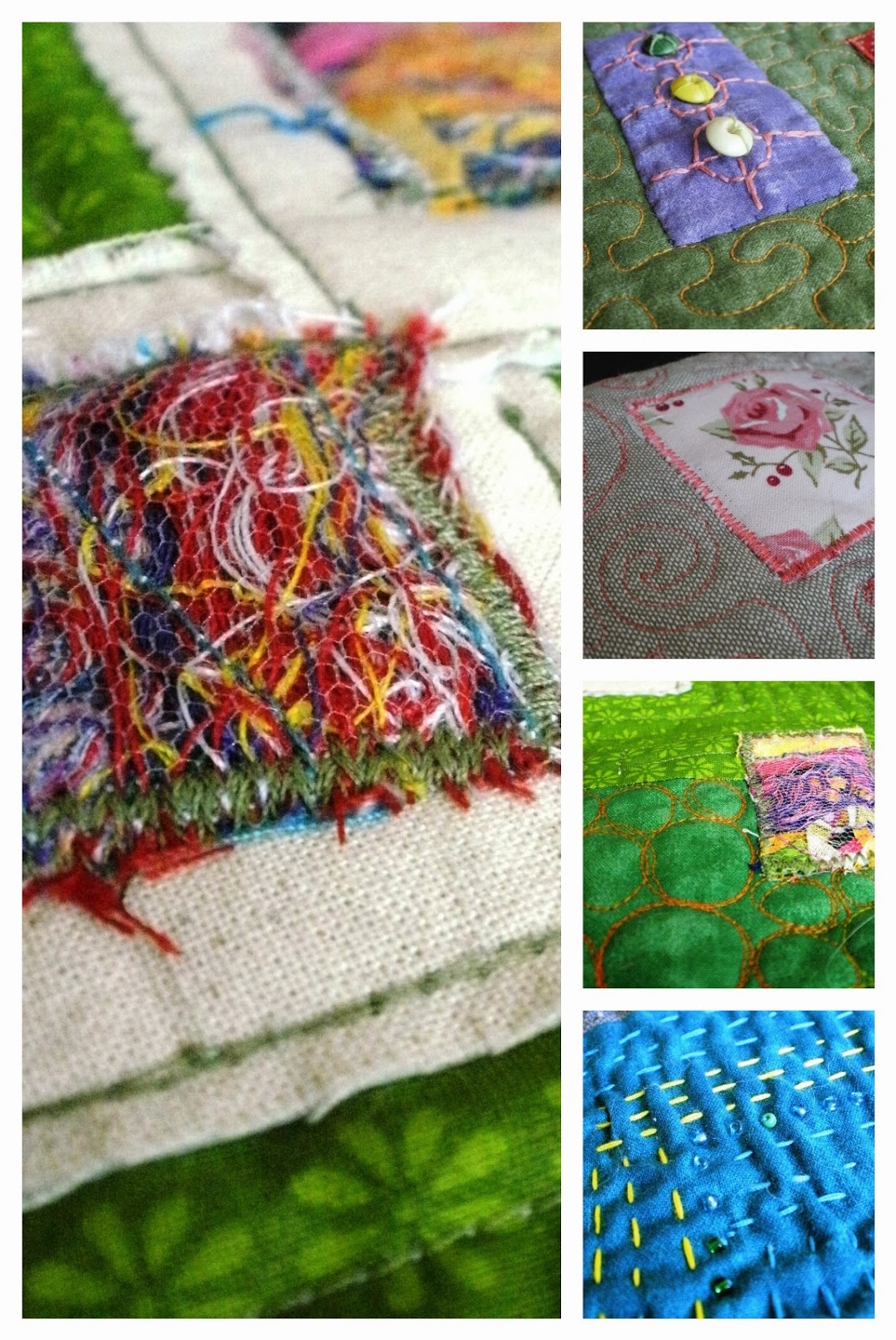 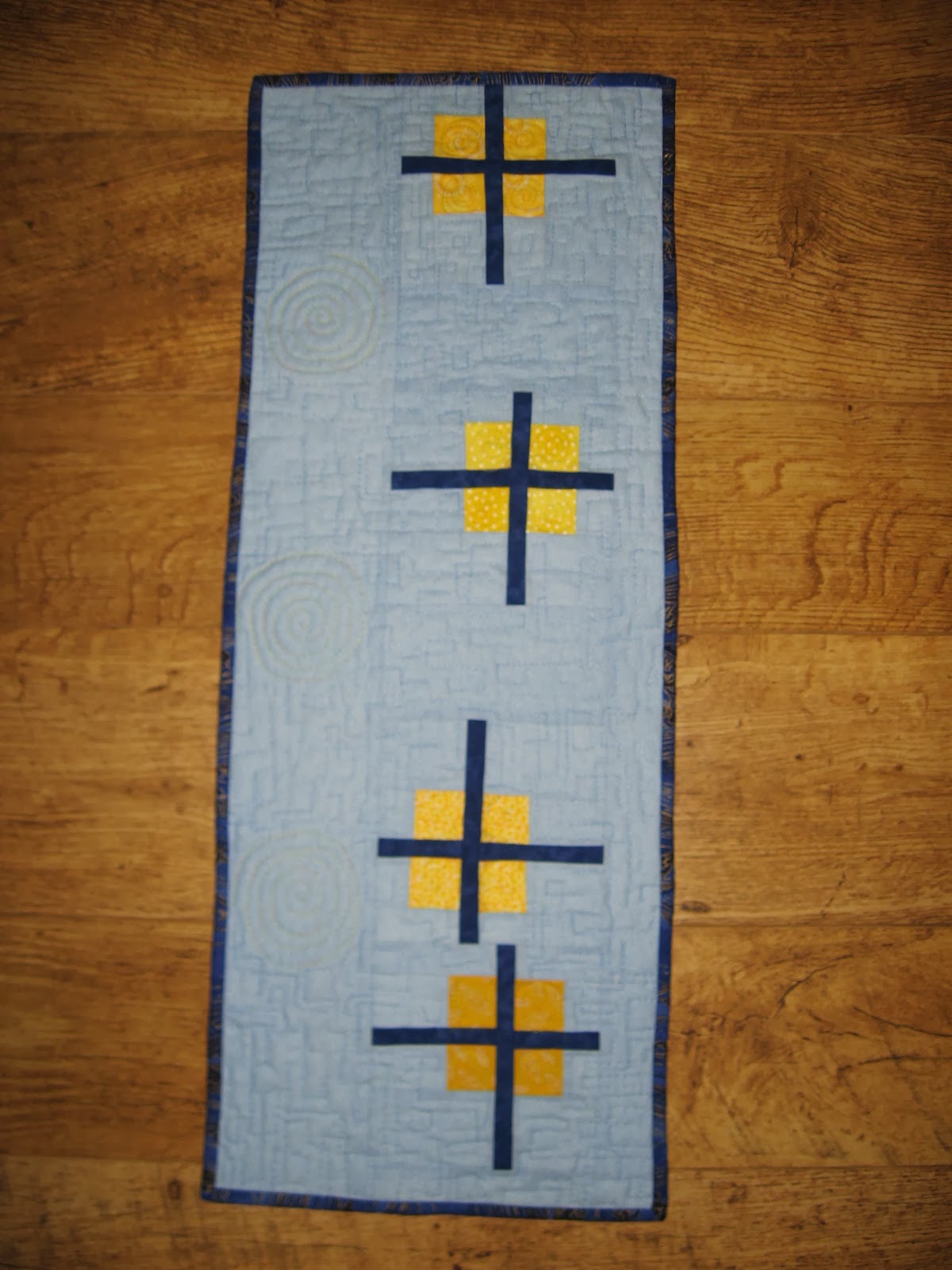 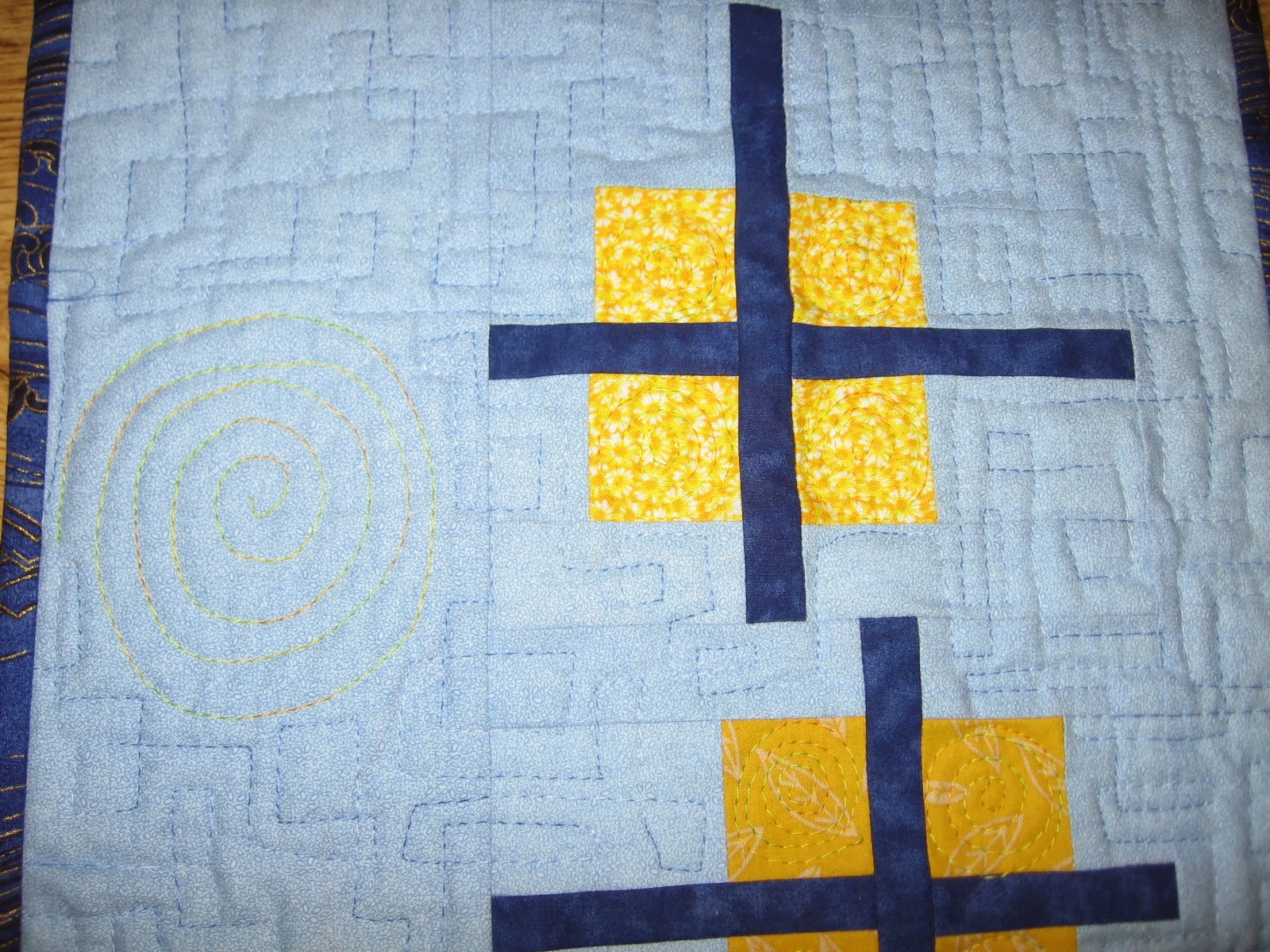 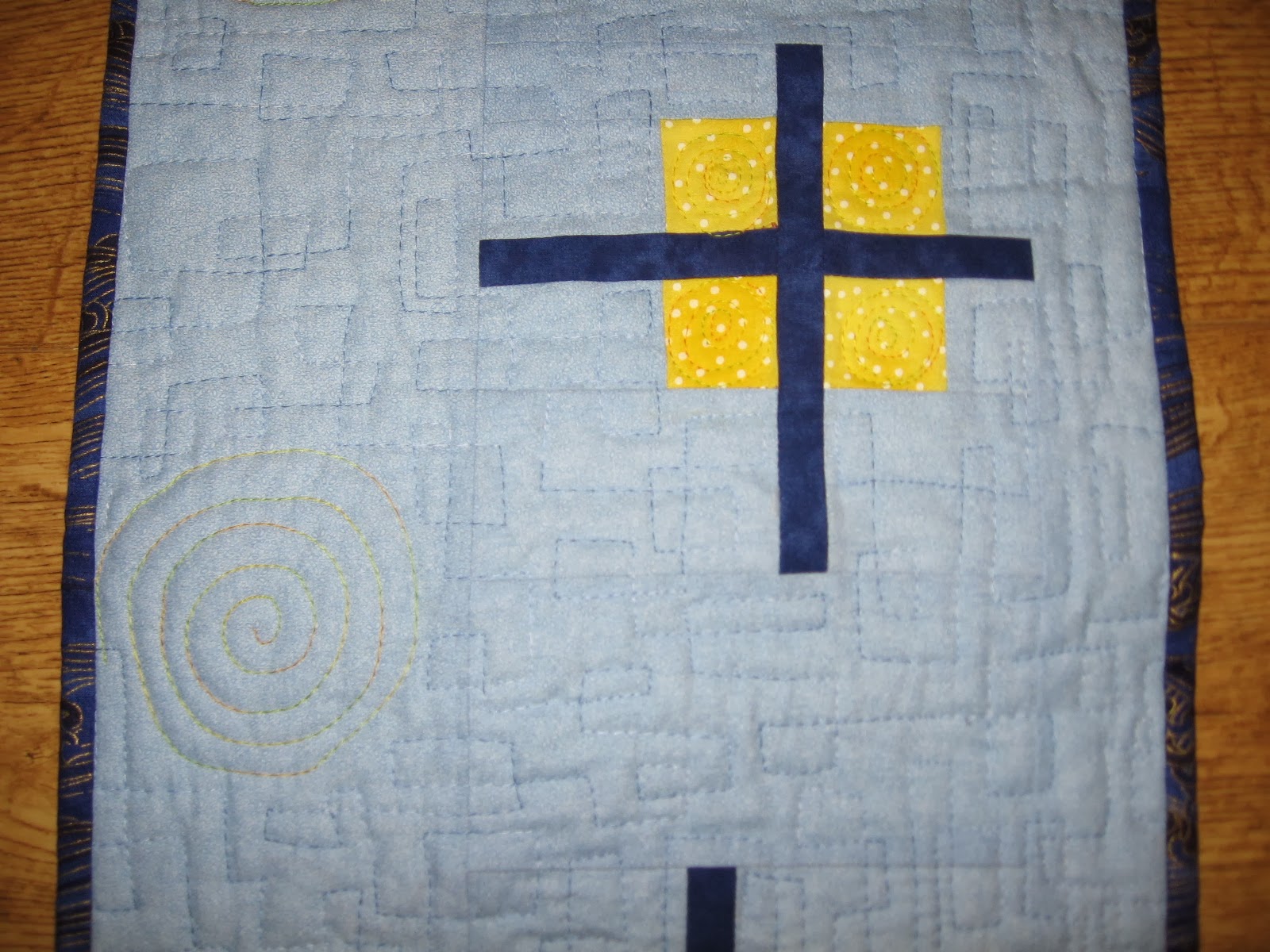 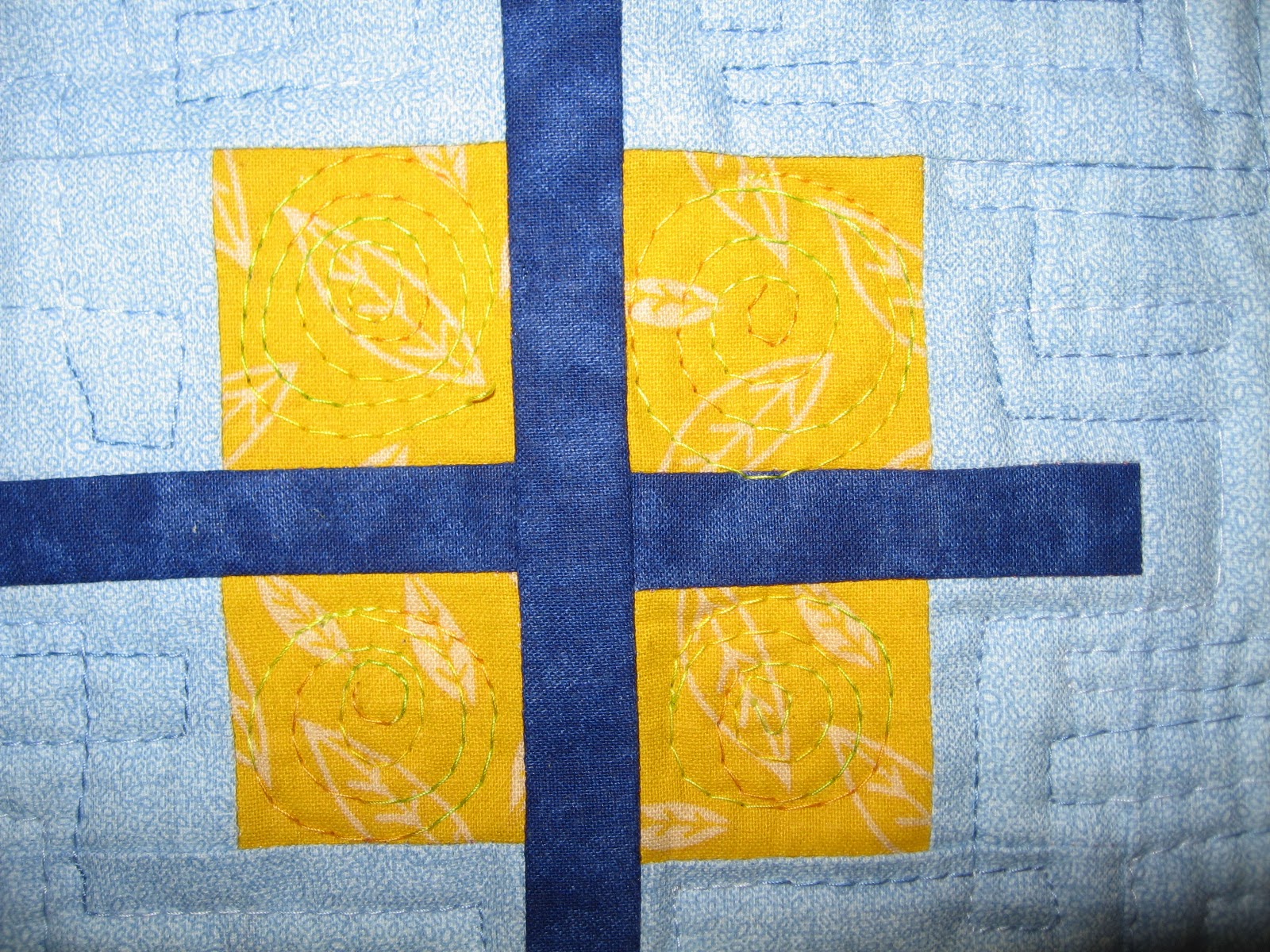 Still a few more to come

Not many, but it's late and I should go to bed (I'm a real night owl, but unfortunately, I also have to work in the morning - bummer).  The rest (3, I think, but I will double check to be certain I'm not missing any out) will be uploaded tomorrow, barring disasters!
Posted by Kate North at 23:59 No comments: 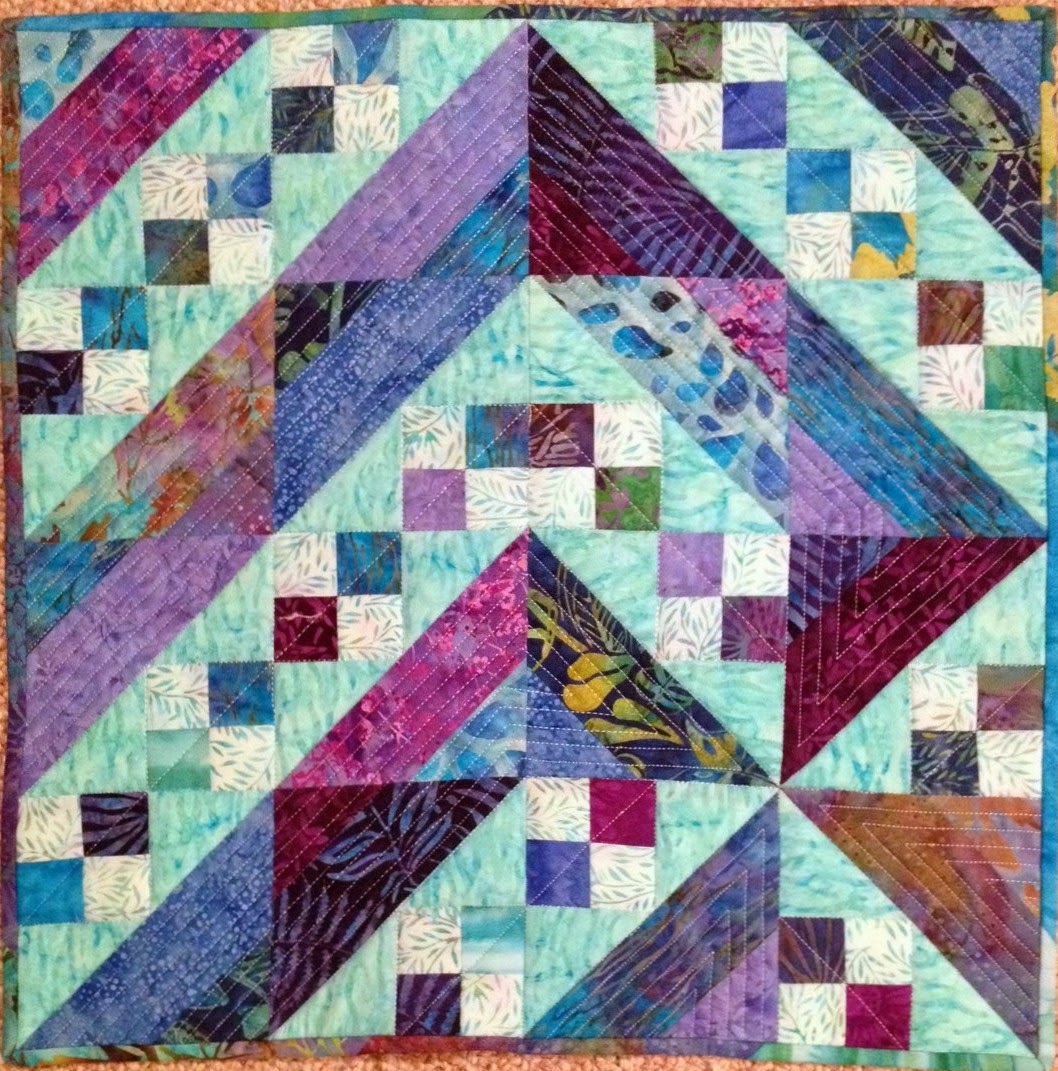 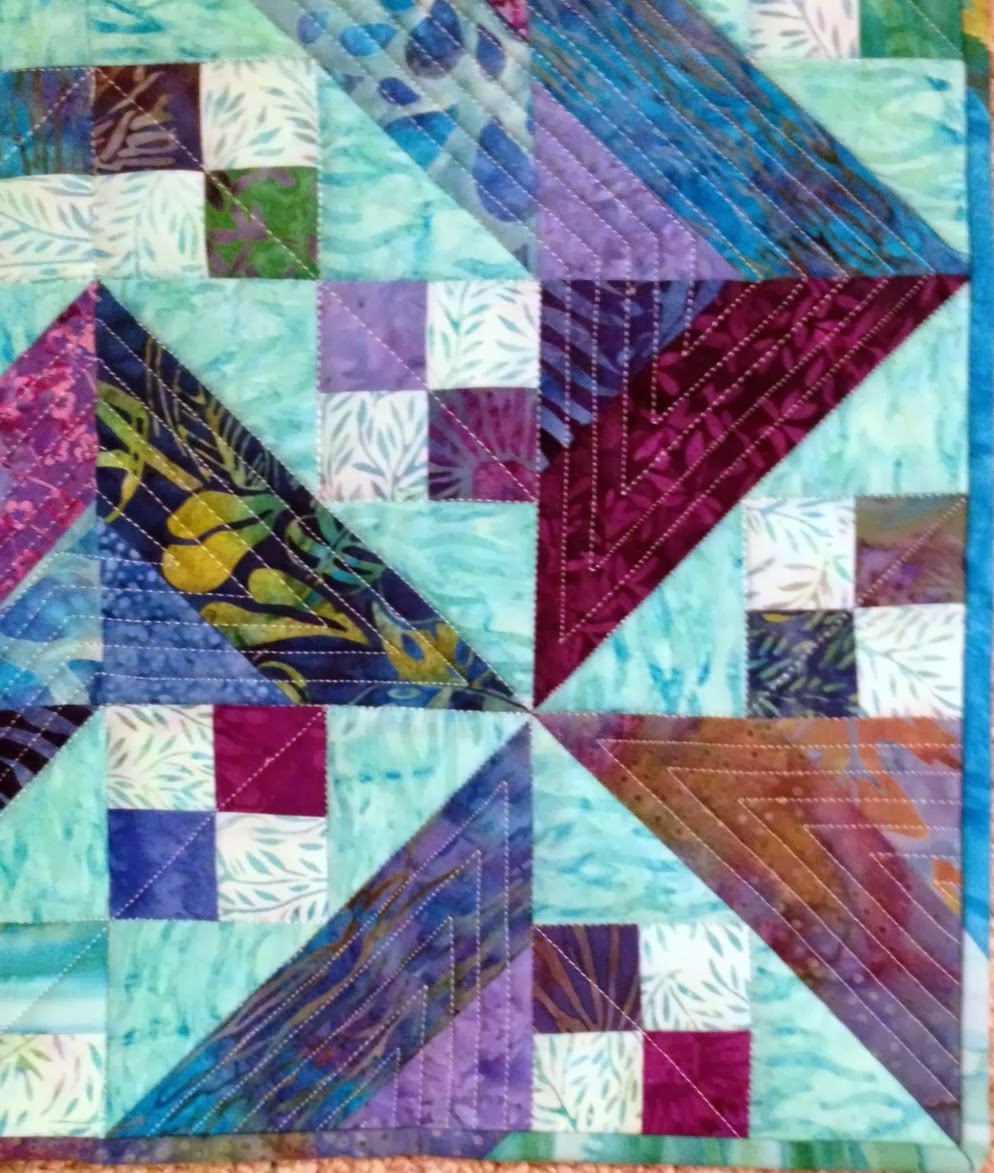 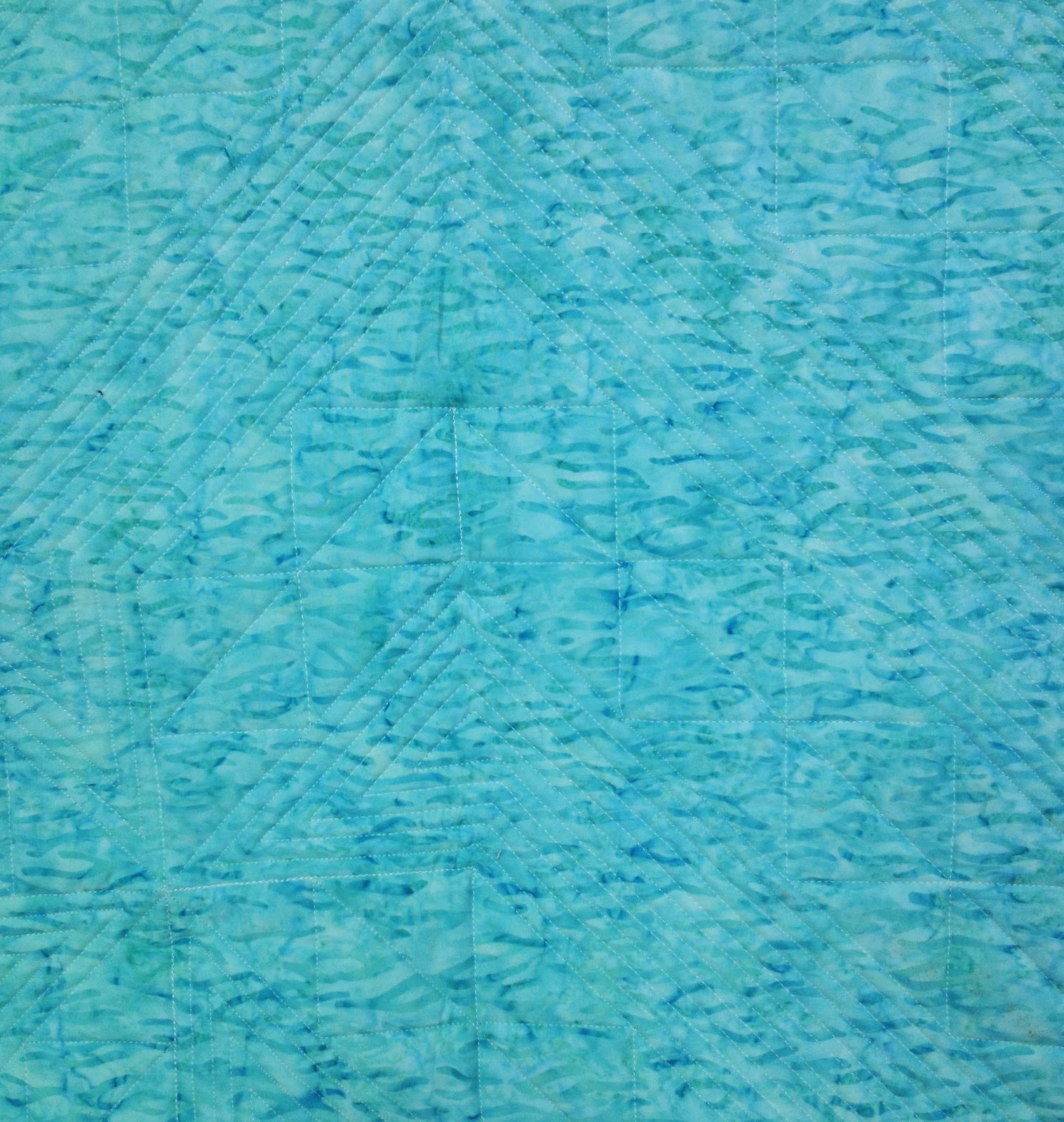 The Batik-A Triangle
12.25" square
Combination of free pieced and paper pieced batiks. Quilted in the ditch with monofilament thread.   Note: I had a hard time balancing the colors in the photos. The colors are more accurate in the close up shot. 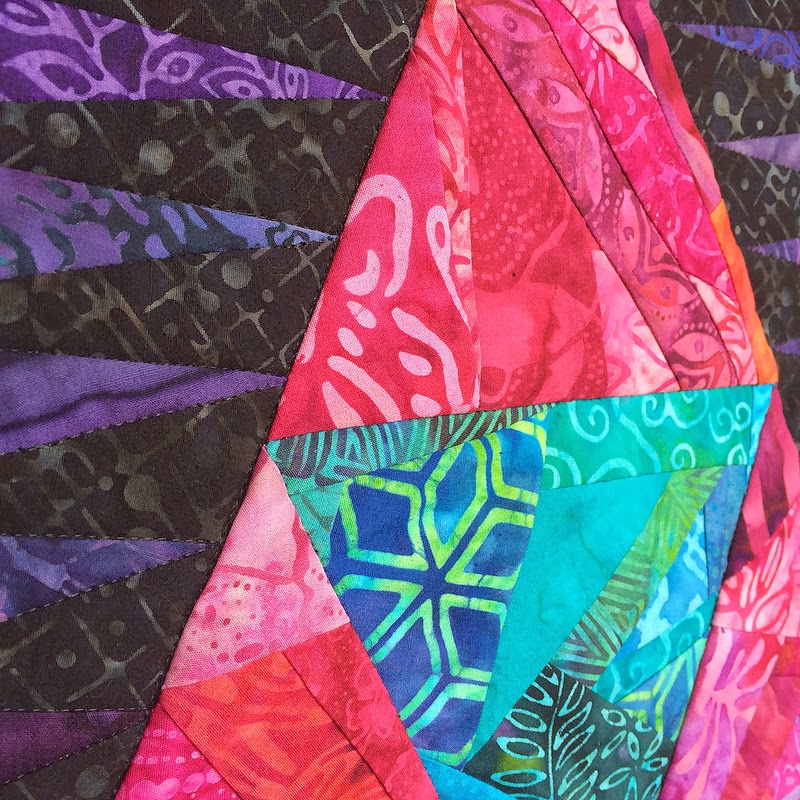 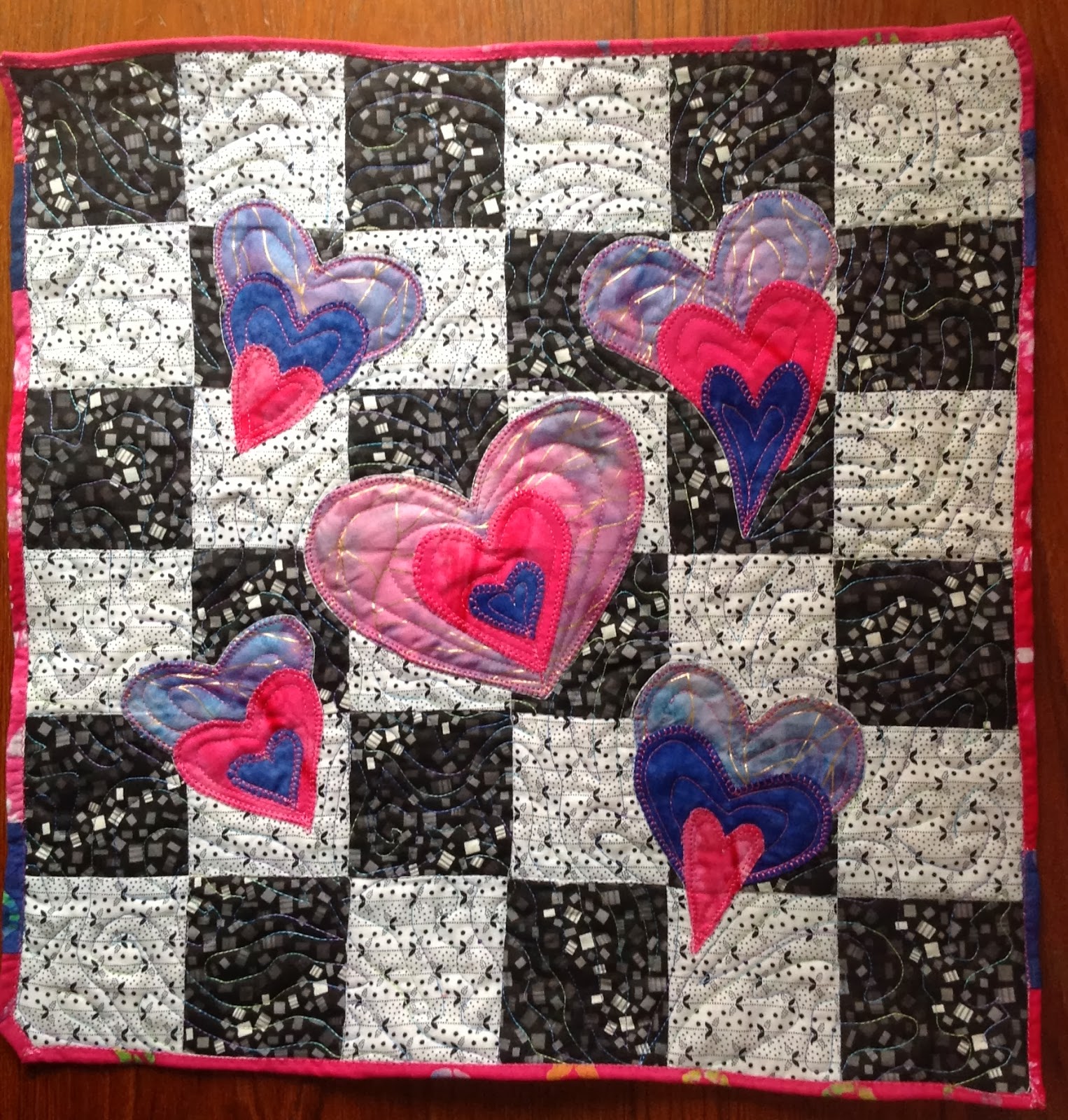 Kindness Multiplies
15x15"
Small acts of kindness (whether intentional or random ones) beget more kindness, and the friendliness of these actions multiplies positive energy in such a delightful way.    It is pieced, appliquéd and free-motion quilted.This little quilt is called "Kindness Multiplies" as it shows little hearts expanding and growing all on their own much like little acts of kindness multiply into more kind acts. 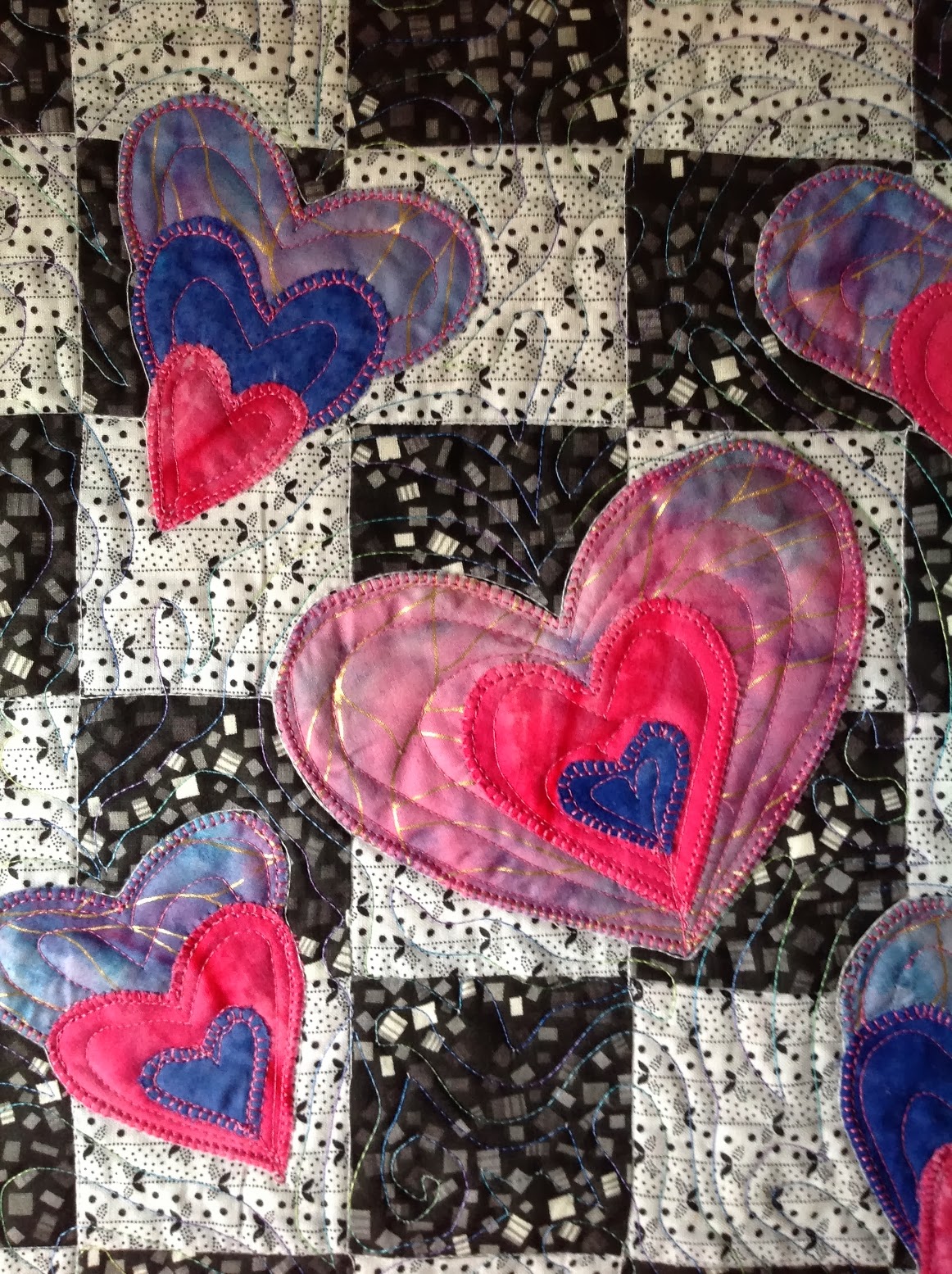 the back of the quilt: 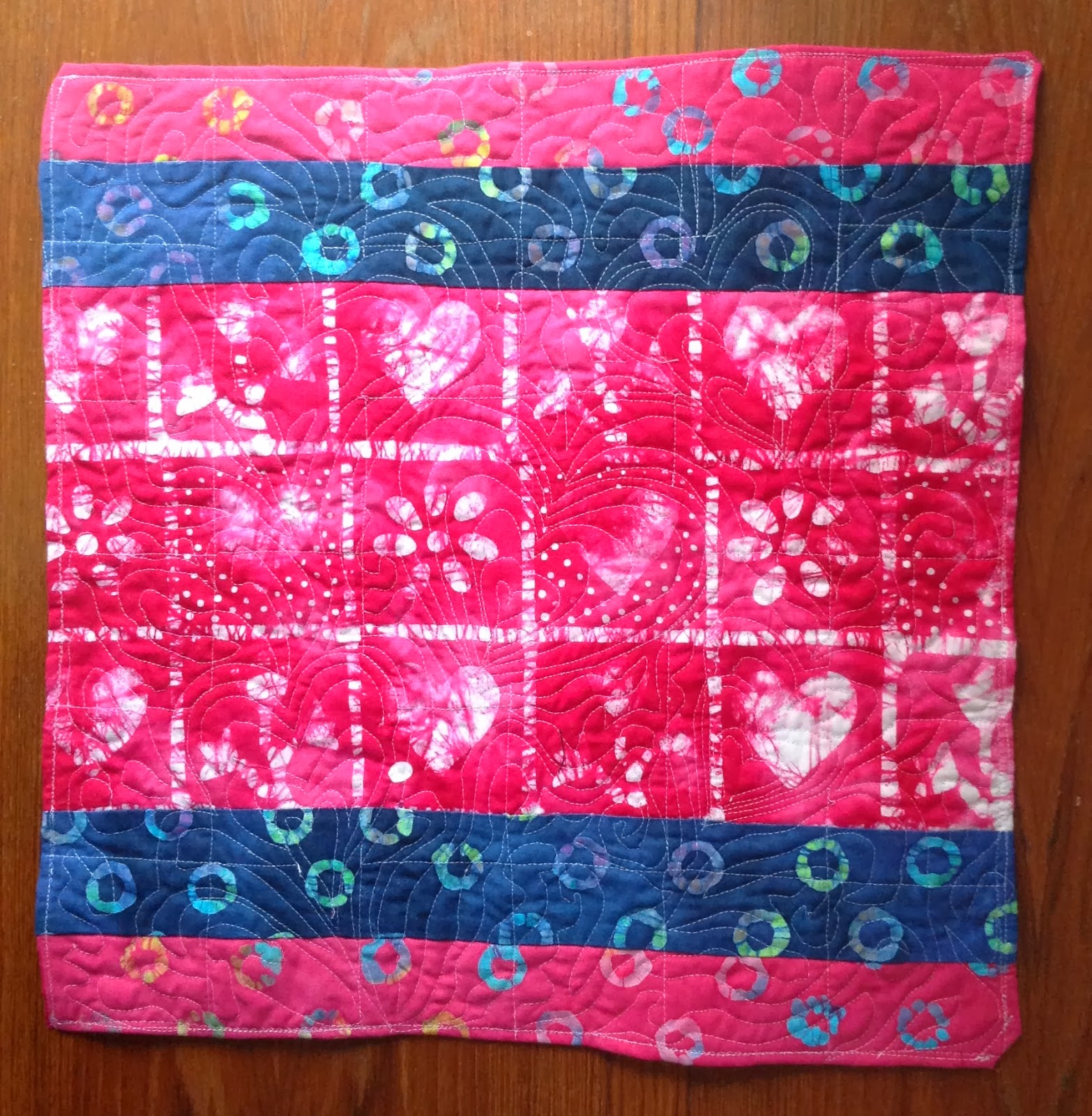 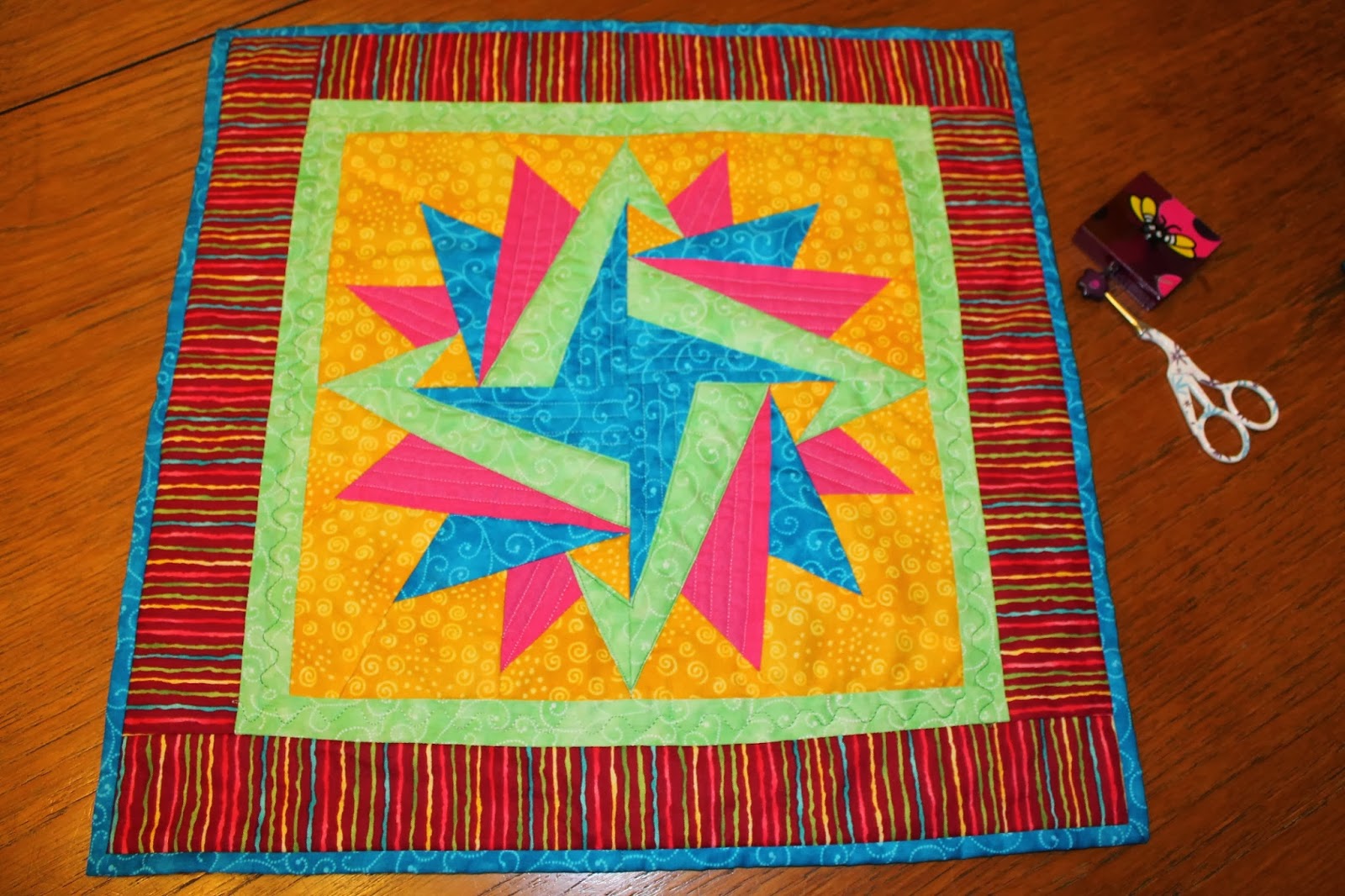 untitled
16.75" square
My quilt is based on a foundation block I found on the internet.  It's called Indian Summer Block, and is by Piece By Number.   Foundation pieced by machine, with some straight line machine quilting.  The fabric is 100% cotton from my stash, and has a double fold binding, hand stitched to the back. I have included a hanging sleeve. 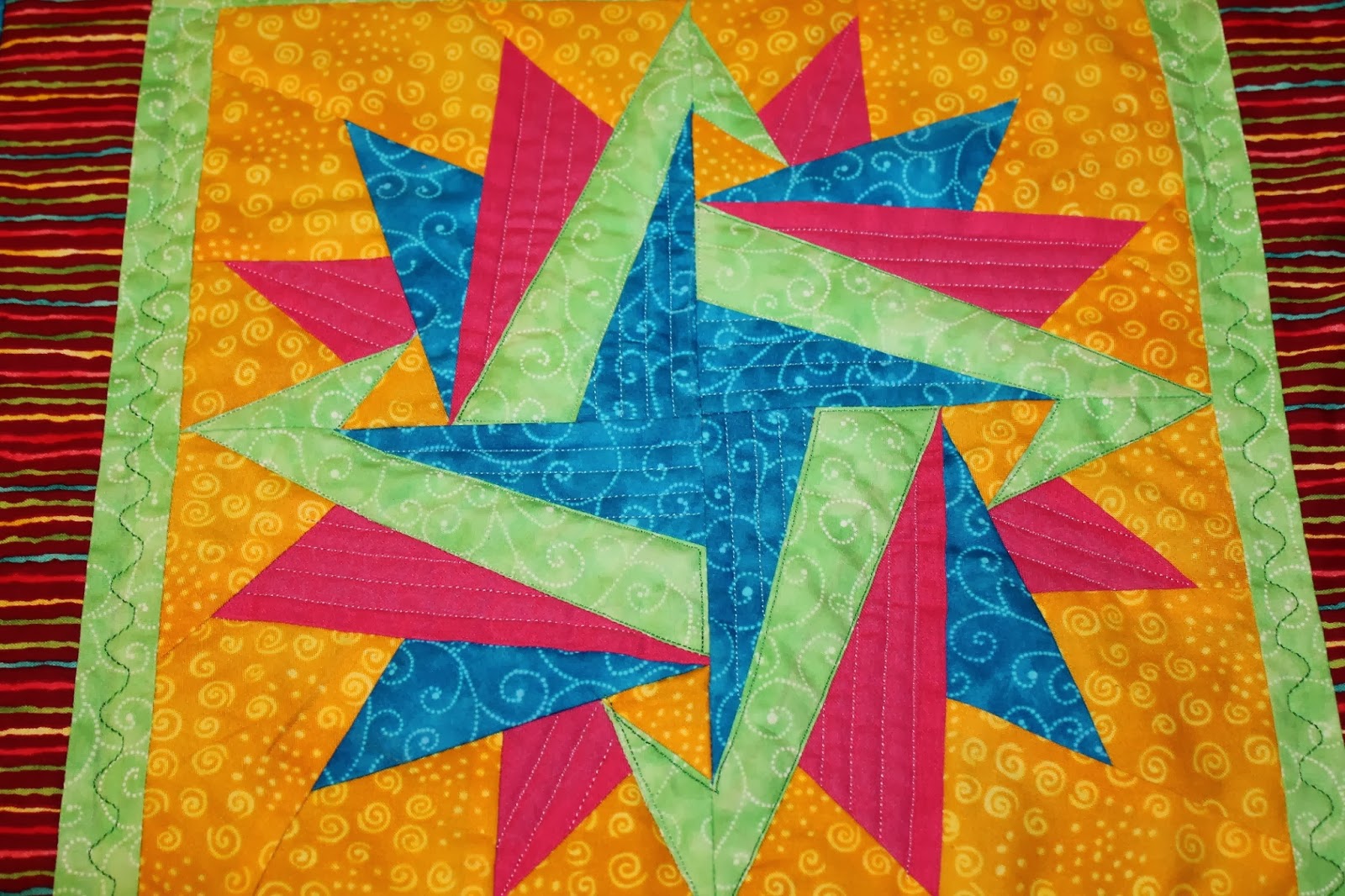 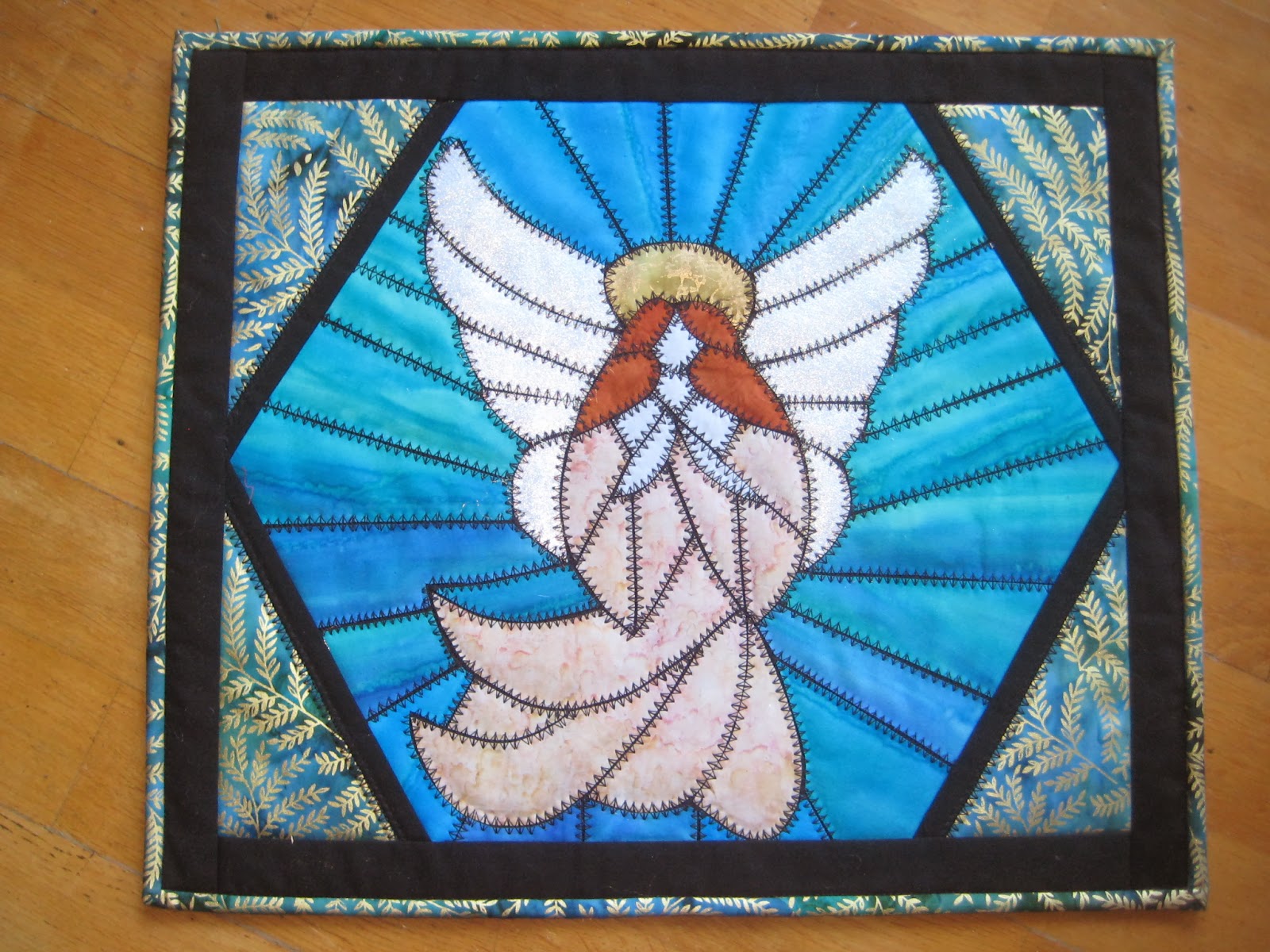 Angel
16.5x15"
Cotton fabrics and cotton batting. Angelina fiber. I took a picture of a mosaic angel outside a shop in a small town in Canada some years ago.  This picture has been my pattern for this quilt. 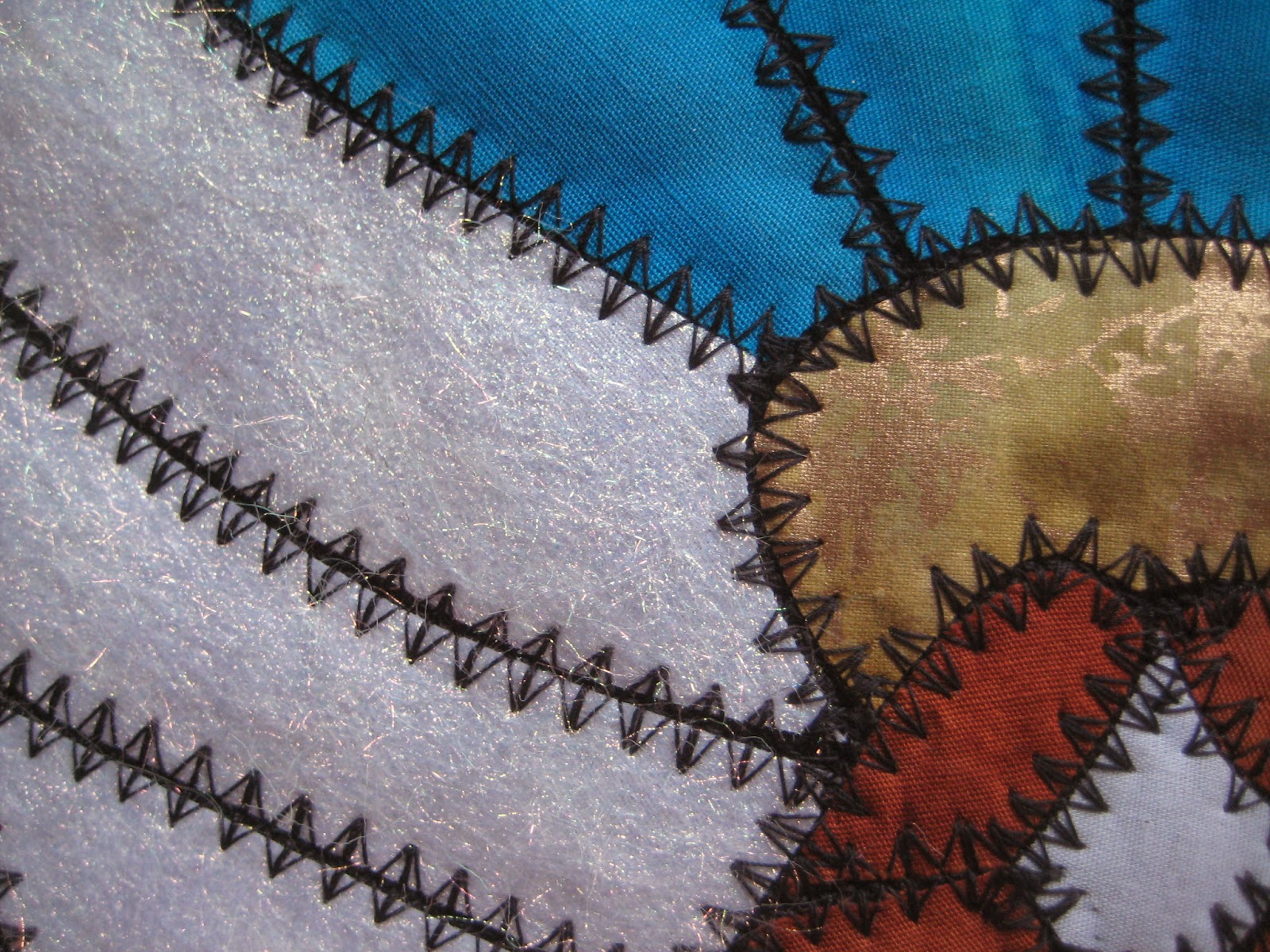 Thanks to everyone who has sent photos of quilts for this swap. I still have a few more to upload, so don't start making plans for which ones you want, just yet!  I'll let everyone know when all the quilts are on site, but it will probably be another day or two.
Posted by Kate North at 21:13 4 comments: 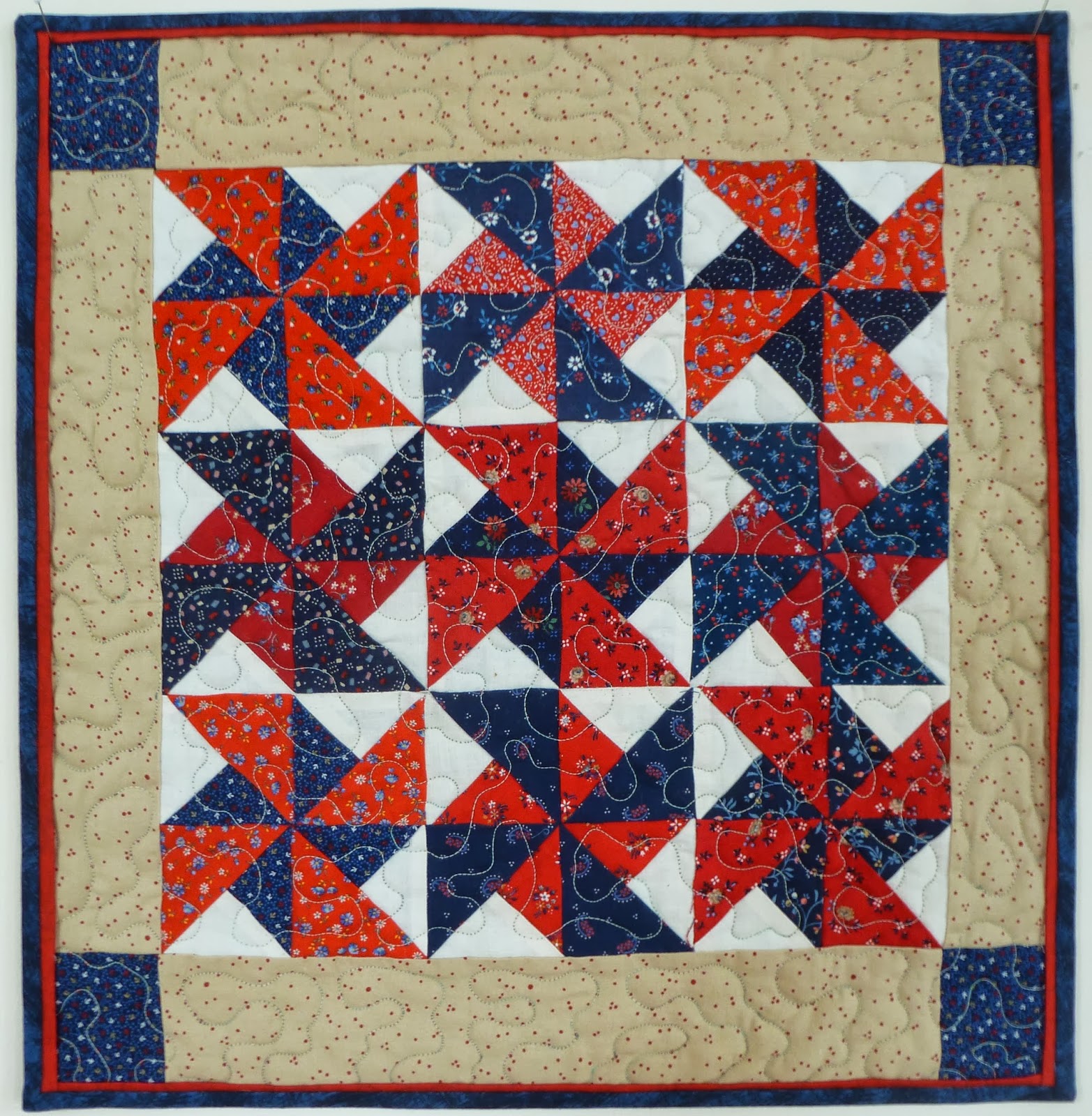 untitled
approx 16x16.5"
The top was paper-pieced, then I added a border and placed a pleat under the binding.It has triangle corners for hangers 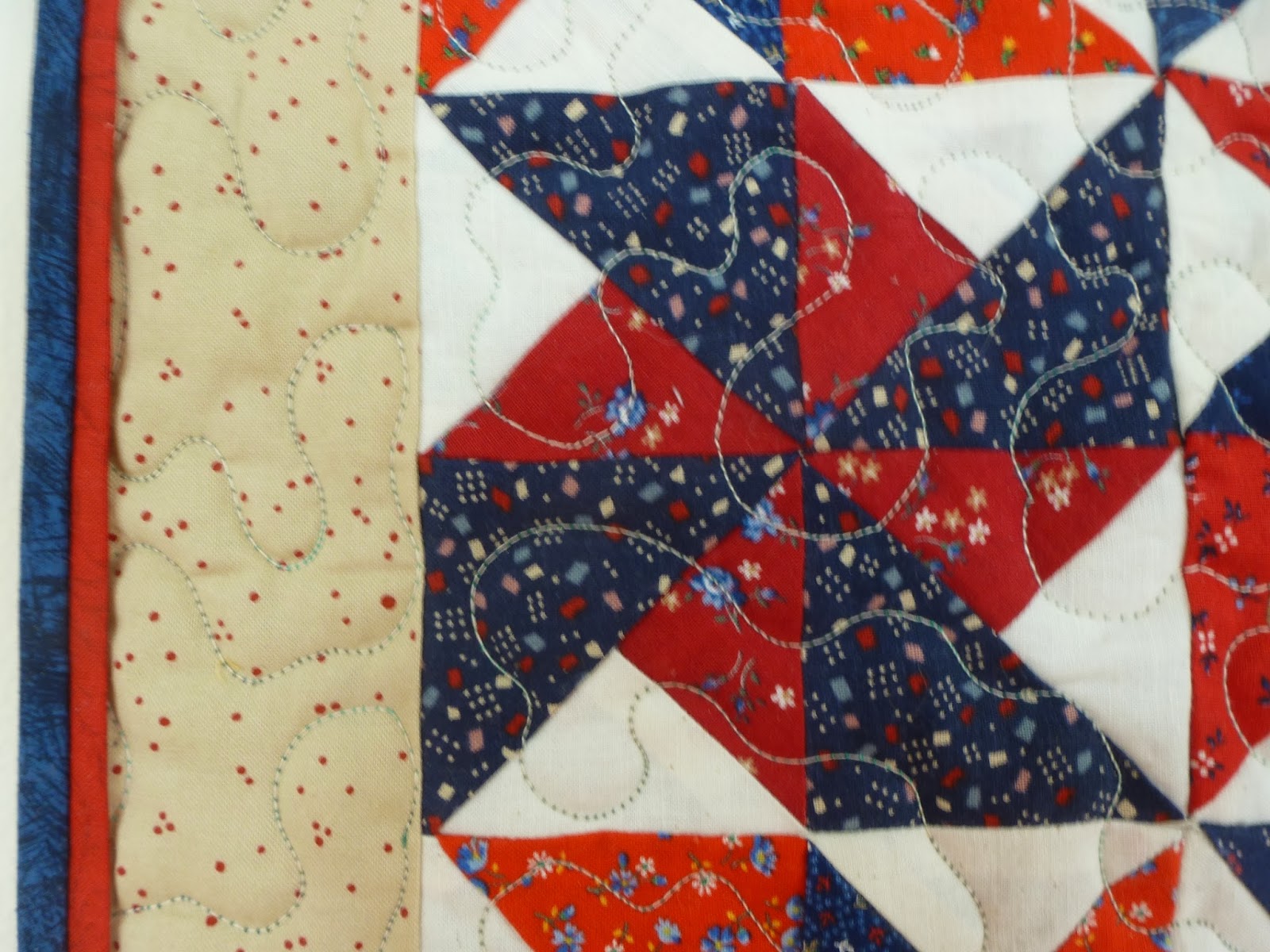 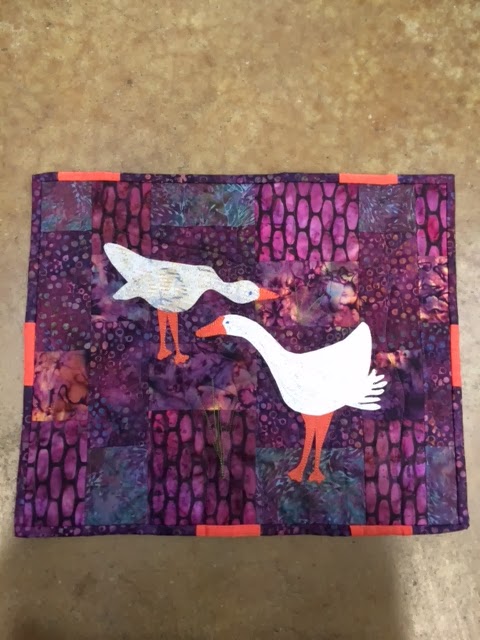 In the Yard
approx 11x14"
This quilt is the maker's own design. 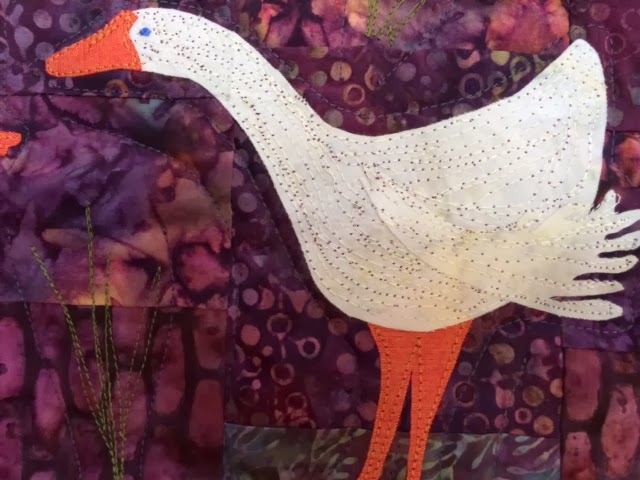 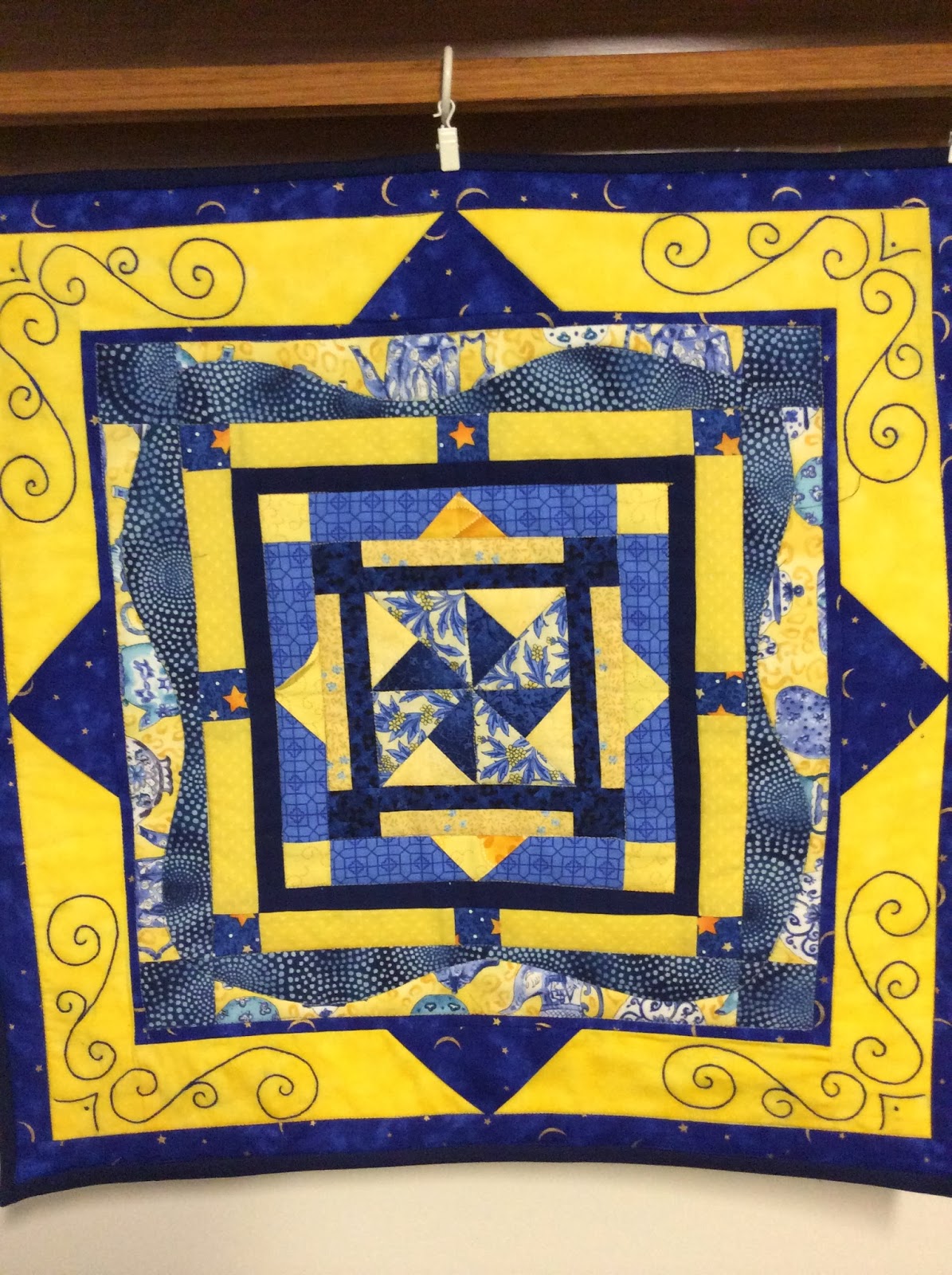 untitled
approx 20" square
I started this  a while back as a round robin swap and I decided that this was a good opportunity to finish it. The quilt also has a hanging sleeve 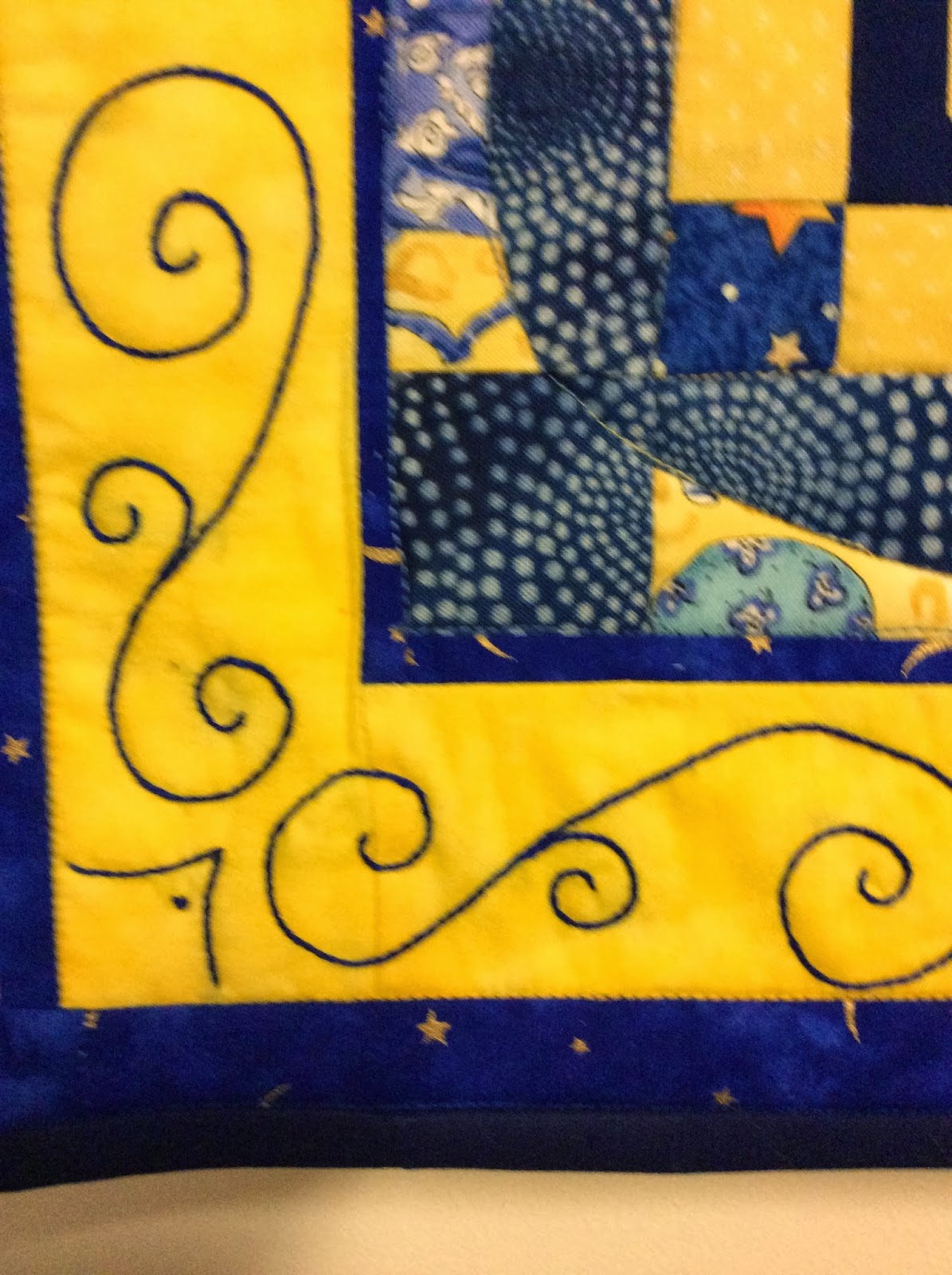