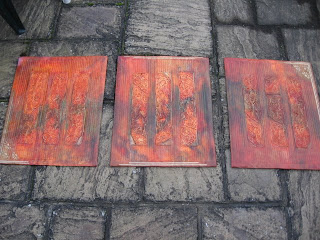 Some of you may have seen these photos and read a lot of this text, as this is what I put up on my own quilting blog, but I thought it was worth repeating here so everyone could see the amazing work.

These three amazing pieces are my "mini quilt" home from the Cyber Fyber exhibition. In round 2 of the ALQS, Lynda drew my name as partner (yes, that's one of the perks of being the hostess - picking who will make you a quilt) and was originally supposed to make me a nice little art quilt, somewhere in the 20" square region. She contacted me shortly after we started ALQS2 to ask if I'd like to have the quilt she was planning to make for Susan Lenz's Cyber Fyber exhbition - of course, I said yes - it's lovely to own a quilt which has been exhibited. At that point, it was still planned to be a small piece, in the 20" square region. However. As happens with art, the piece(s) had a mind of its own and grew - grew to be three pieces, each of them 24x30". Other than the concern for where in my house (which, unfortunately for me is not a country mansion with its own long gallery or anything like that!) I would hang them, I didn't mind at all. And seeing them in person, well, let's just say, finding space was certainly a non-issue - it would be done! As it happens, I thought they would look rather nice in the newly painted stairwell in my hallway, and I was right. They could do with a little more light (though it's not nearly as dark as it appears in the photos below), but on the whole, they look really good there, and you can see the texture to good effect, as you can get very close. [If you are interested in the technique, Lynda explains a bit about it here - where she talks about a practice piece made in a similar way.] 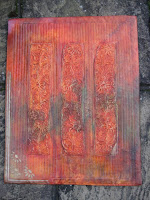 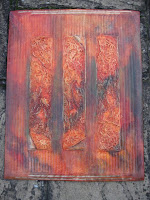 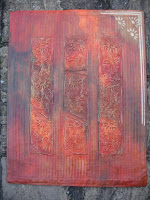 I took the pieces outside to photograph, so here they are together on my patio - in the right order. And some detail shots below - the left photo from the bottom middle of the lefthand piece, the right photo from the top right-hand corner of the far right piece. 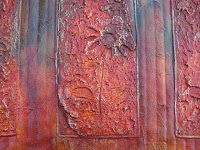 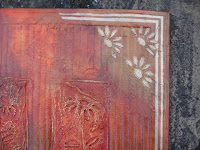 And finally, here are some photos of them in the stairwell - lesson learned today - it's bloody hard to photograph a stairwell (actually, I already knew this, as I had tried to photograph the carpet before to show my mother, and failed miserably). As I said above, the light is not as bad as it seems in this photo, though it's not perfect. 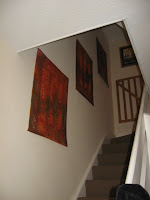 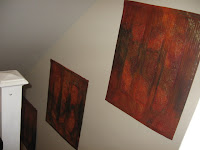 So. What a nice end to the ALQS2 swap for me and what a lovely addition to my decor. Thank you so much, Lynda - I really, really love them.
Posted by Kate North at 08:23

They are great. I can imagine you being really happy to have them in your house.