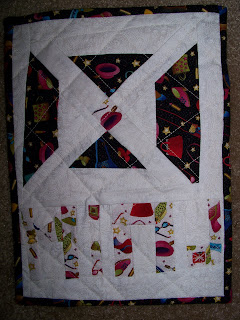 Mind
This quilt was originally made for the Alzheimer's Initiative, but in the end, wasn't contributed.

The fabric I choose was one with lots of things scattered on it - hats, lipstick, shoes, purses, eyeglasses. It seemed like a good choice. Sometimes I have an idea in my mind, and I either choose the wrong word, or I am reaching in my bag of words for the word, and the fabric just seemed to depict that kind of situation really well.

For the top part, I wanted to show something that was a little off. Just enough to say "something's not right" without actually knowing what's wrong. The size of the strips used to make the pieces aren't exactly the same, and the block was then trimmed at a slight angle. I think it worked, my mother said, "Is that supposed to be that way?"

The bottom part has a word on it - I used a low contrast so it wouldn't be easy to see unless you tried. It says Mind. My nephew said "Sometimes I can see it and then I lose it and have to look for it again." Exactly what I was going for!

The quilting is a wonky grid. 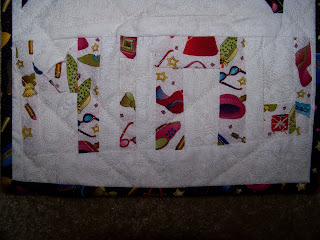 Really well thought out quilt :-) I like its wonkyness.