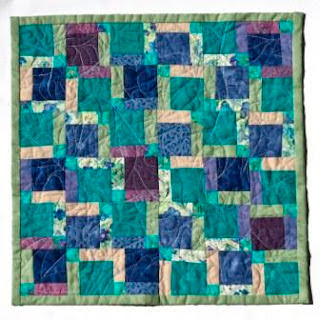 Here's another quilt I didn't have a photo of before - this is the quilt Dawn in Turkey made for her partner. Most of the quilts are now safely in their new homes - one or two still in transit or waiting for their owners to come back from holiday and see them, but very soon we will have the promised roundup. Thanks for your patience, everyone.
Posted by Kate North at 23:46 1 comment:

Hello everyone - just a note on the second round of this swap, as I said I might start taking signups in early August - I've decided to push the dates back a little and not begin taking signups until later in August - part of this is that I'm just too busy! But also, there are still two outstanding quilts from the previous round and I'd quite like to get these finished off before I start again. I'm still looking at a completion date of October, but probably right near the end.

Thanks to all of you who responded to my survey - the information will be helpful when it comes time to start the second round. I think that for the second round, I will offer the option of choosing to make and receive an art quilt* - if I get at least 10-12 people who would be interested in that option, we'll run an art quilt sub-set - but rest assured, it will only be an option, and there will be plenty of participants who wish to stick to something more traditional.

*in this context, I am using "art quilt" to cover a range of possibilities - from something using fairly traditional materials but in a modern, free-form construction (like what Lorraine or I made in round 1) to something much freer - for instance, a mixed-media construction like Lynda made.
Posted by Kate North at 21:47 2 comments:

Hi everyone - by now, most of you should have received by email a little follow up survey from this swap - the exceptions will be those of us who have either not received their quilt yet, or the two who have had extensions and haven't posted yet. If you have both received and finished & mailed your little quilt on this swap, and haven't received my email with the subject line "ALQS follow up survey - brief!" let me know and I will try sending it from an alternative address - I know several people last time around had trouble receiving email from my yahoo account...

Thanks to those of you who have responded already; the information will be very useful next time around when trying to make sure partner matches are the best they can be.
Posted by Kate North at 08:07 2 comments: 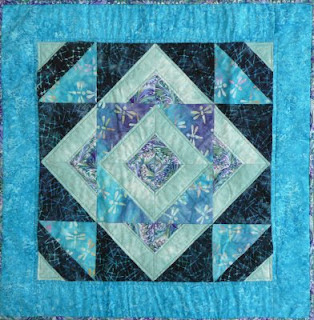 This quilt, made by Shelly for Stephanie, was actually received a little while back, but I lost track of it a little, I guess. Anyway, having just made the rounds of the one or two blogs of people I hadn't heard from yet about quilt receipt, I realised it was safe and sound in it's new home, so thought I'd share it here. There are more photos over on Stephanie's blog...
Posted by Kate North at 23:21 1 comment: 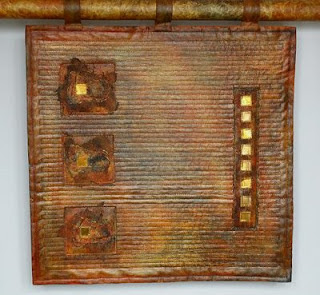 Just realised while doing all this housekeeping (the swap admin type, I hasten to add, not the dusting and hoovering type) that I never showed this - Lynda's quilt for her partner. Lynda was a little worried about joining this swap because she doesn't do traditional quilts, but there are a good handful of us here who are more than happy with art quilts, so I reassured her. I know some of you might find this a little arty but I love it. Wish it was for me!

For those of you who are wondering about the construction of this quilt - check out what Lynda has to say about it on her blog...
Posted by Kate North at 22:31 7 comments: 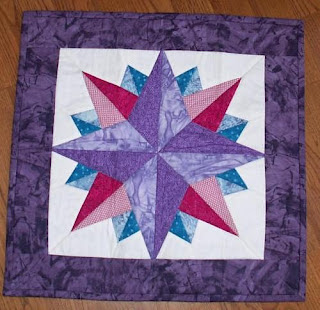 At the moment, I'm doing a draft of my grand reveal - and I realised while doing it that I somehow managed to miss out this lovely quilt, which was made by Tracy. Gorgeous, isn't it? Yes, it is.
Posted by Kate North at 22:25 No comments:

This one's not purple! 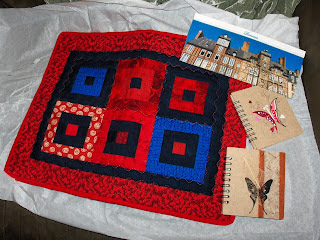 But isn't it gorgeous? This is the mini that Ann J made for Sarah (and again, as it has been received, it's safe to say whose it is) - Ann had forgotten to take a photo before she sent it off, so I've been waiting for it to get to its new home so I could show you all (not to mention, see it myself).
Posted by Kate North at 21:18 1 comment: 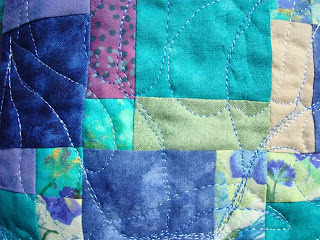 Here's a peep at Dawn's quilt - the colours aren't great, but I think we all know how hard it is to photograph blues and purples. It looks really promising, though, doesn't it? Can't wait to see the rest!
Posted by Kate North at 23:37 No comments: 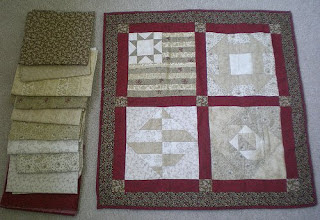 Here's a lovely little mini which Toni made for Cathi - I can say that, because it's been received. Cathi has a fondness for Civil War Repros, and Toni made her this mini with blocks from the Civil War Diary quilt. The extra fabric was included with the quilt - I snatched this photo off Cathi's blog!
Posted by Kate North at 23:28 1 comment: 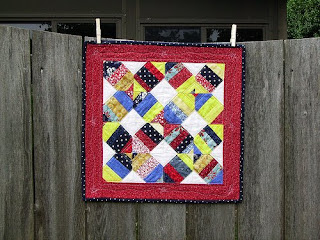 Here's another little finished quilt - only a few more to go (a few of the finished ones, I haven't had photos of) and we'll be all caught up - so many lovely quilts, I'm so envious as I wish I could have all of them myself!

When a few more quilts have made it to their final destinations I will do a "grand reveal" - that is, a nice post with a list of who made which quilt for whom, with photos. I'm really looking forward to that myself - I'm sure you will all enjoy it as well...

I forgot to say - this quilt was made by Solidia.
Posted by Kate North at 22:17 3 comments: 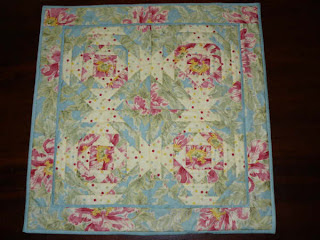 Here's another lovely little finished quilt - this one made by Lynda for...someone! She sent me a lovely photo of the back, which shows the quilting (hand-quilted, in the ditch), which doesn't show much on this photo. However, it also shows the label, including the name of who it's for, so I'm not sharing it yet - maybe later...

We're doing well now - another few quilts have been received beyond the last update and I have heard from all those who haven't mailed yet, so I know what point their quilts are at. Yes, there are a few people who needed a little more time, but we all know how life goes - health issues, children's health issues, and other things do happen - as long as I'm kept updated, it's not such a problem. And many thanks to the other two recipients besides myself whose quilts are yet to be posted for your patience & understanding. I'm sure it will be worth the wait!
Posted by Kate North at 14:05 4 comments:

Since yesterday, I've heard from a few more people, and am happy to say that now:

Of the 41 quilts in this swap:

At least one person has asked about a "grand reveal" - and yes, there will be something of the sort on the blog when the quilts are all sent and received - a post (with photos) of who made what for whom. But it will be a little longer before we get to that point, so you'll just have to be patient and work it out from the comments and from visiting everyone's blogs!

Hi everyone - just a little update on quilt statuses, etc, in case you are wondering...

There were 41 people in this swap, so 41 total quilts. Of those:

So, we're nearly there, ladies (and gent). Those of you who haven't had your quilts yet, hang in there, they're coming! And thanks for your patience. 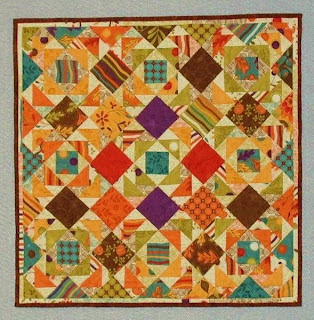 Here's another finished little one - isn't this great? It's kind of wild, it's true, but in a good way! This one was made by Ann, and is now on its way to... someone!
Posted by Kate North at 22:15 6 comments: